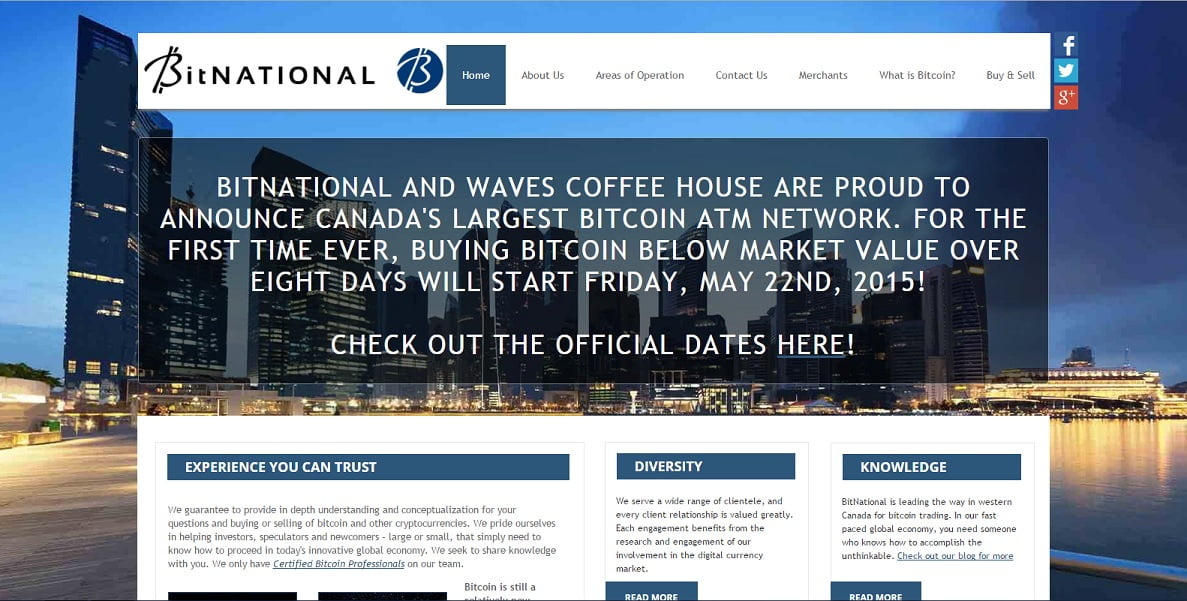 Canada has long been a hotspot of Bitcoin activity, home to the world’s first Bitcoin ATM and (relatively) widespread Bitcoin adoption. Several exchanges have come and gone, but current competitors for this growing market include CoinTrader, QuadrigaCX, Taurus, and now BitNational.

BitNational got their start at in West Edmonton at North America’s largest mall, where they debuted a Robocoin Bitcoin ATM. They eventually moved on to acquire Bitcoin Brains, Calgary’s oldest and most established Bitcoin brokerage, for $2.1 million. Now they’re poised to become Canada’s largest network of BTMs and brokers ever, thanks to a landmark deal with Waves Coffee House.

Waves was an early supporter of cryptocurrency, being one of the first businesses signed up by the Bitcoin Co-op in addition to the location of the famous Bitcoiniacs BTM. Now, they’ve partnered with BitNational to initiate the largest storefront chain in Canada for buying food, beverages and bitcoins all in one of many convenient locations.

Although not all of the Waves locations have BTM’s yet as of the time of this writing, all of the locations that do are now accepting Bitcoin. The growing list includes the Waves at Shelbourne, Chinook, Springborough, London Plaza, Main & 10th, Londsdale, Broadway, and an additional location soon to be announced.

“We see this as the opportune moment to raise serious awareness about Bitcoin,” stated BitNational co-founder Drew Glover. “There is a rapidly expanding group of individuals around the planet beginning to comprehend the significance of this innovative technology. This is not going away anytime soon.”

To celebrate the launch of this network, a party will be held at each BTM location, every day from May 22-29. There will be draws of free Bitcoin, as well as door prizes and free coffee from the House, and a grand finale at the undisclosed location.

The announcement that has most Canadian traders excited, however, is BitNational’s promotional plan to sell bitcoins below market price. Starting May 15th, their brokerages, Edmonton ATM, and new BitAccess models being installed at Waves will all be trading at 0% fees, and undercutting all major exchanges until May 31st.

“We are literally going to provide you with more digital cash than the paper cash you give us,” explained Matt Haddon, BitNational’s other co-founder based out of Calgary. This will come as a delight to those engaged in arbitrage, and if enough locals use it, it could impact the price on competing online platforms depending upon their exchange volume.

Tags: bitcoinbitcoin ATMbitcoin exchangecanadacoffeecryptocurrencylaunch partyNewspromo
TweetShare
BitStarz Player Lands $2,459,124 Record Win! Could you be next big winner? Win up to $1,000,000 in One Spin at CryptoSlots