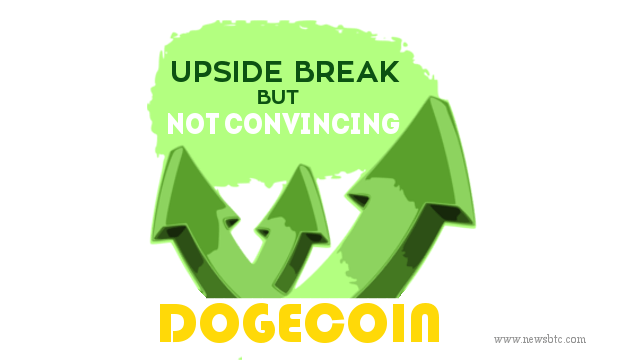 Recent break higher in Dogecoin cannot be considered as a bullish move, as there was hardly any momentum.

We mentioned in yesterday’s post, that there was a crucial breakout pattern formed on the hourly chart of Dogecoin. It was breached recently by buyers, but there was hardly any rally towards the upside after the break. Buyers seem to be struggling to take prices higher, which can be considered as a worrying sign in the near term.

A crucial bearish sign to note is that the price is still below the 100 hourly simple moving average. Moreover, the mentioned MA is aligned with a previous swing area of 49.5 Satoshis. If buyers succeed in piercing the mentioned resistance area, then the next level of interest would be around 50.6 Satoshis. In short, there are many barriers on the upside for Dogecoin.

On the downside, there is a major support formed around 47.0 Satoshis. The triangle support trend line might still come into play if the recent break turned out to be a false breach. The mentioned level also represents a pivot area for Dogecoin.

The hourly RSI has slowly moved below the 50 level, which can be considered as a sign that the recent break higher was not true and the price could move back lower. There is no bullish divergence on the hourly MACD, and most technical indicators suggest that the upside might be limited in the short term as long as Dogecoin is below the 100 MA.

Tags: caution for buyersDogecoindogecoin technical analysisfalse break in Dogecoin
TweetShare
BitStarz Player Lands $2,459,124 Record Win! Could you be next big winner? Win up to $1,000,000 in One Spin at CryptoSlots