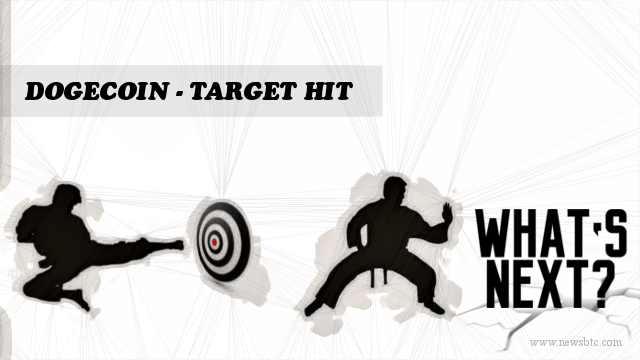 Recent gains in Dogecoin were impressive, but buyers need to be careful moving ahead as it is now approaching a crucial area around 60.0 Satoshis.

In Yesterday’s post, we highlighted that 53.2 Satoshis is a major barrier for buyers, and if they manage to clear it more upsides are likely. Dogecoin price moved higher, closed above the mentioned resistance, and even traded above 58.0 Satoshis. Volatility has picked up Intraday, which suggests that the chances of swing moves are very high.

If the price struggles to clear 60.0 Satoshis, then it could correct lower towards the 50% Fib retracement level of the last leg from 49.2 Satoshis to 59.9 Satoshis. The most important point is that the mentioned Fib level is aligned with the middle band of Bollinger bands, highlighting that 54.4-6 Satoshis is a major support area.

Any further losses might take the price towards a bullish trend line as drawn in the chart attached. The possibility of it breaking the trend line is very less, as sellers might tussle in the near term.

Can it settle above 60.0 Satoshis?

We cannot deny that buyers have the upper hand, which means they might make one more attempt to take prices above 60.0 Satoshis. It would be interesting to see the follow through in that situation.

There is a minor divergence on the hourly RSI, which can be seen as a warning sign to buyers in the short term.

Overall, a retest of 60.0 Satoshis is likely, but the follow through above the same might depend on how sellers react.

Tags: analyzing the next scenariobuy trade target hitDogecoindogecoin price technical analysis
TweetShare
BitStarz Player Lands $2,459,124 Record Win! Could you be next big winner? Win up to $1,000,000 in One Spin at CryptoSlots