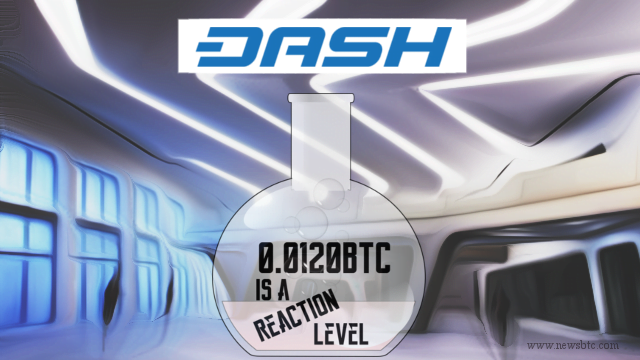 Dash prices continued to stay above 0.0120BTC, but it remains at risk of a major decline if the buyers fail to push prices higher.

As mentioned, sellers managed to take the price below a critical channel support area, triggering a downside reaction. However, the most important point was the fact that Dash prices settled below the 100 hourly simple moving average. It can be seen as a bearish sign, and might spur more declines in the short term.

If the price moves higher from the current levels, then the Middle Bollinger Band might serve as an initial resistance. Any further gains could take the price towards 100 MA, which may well act as a pivot area for more upsides as it is also coinciding with the broken channel support trend line. In short, there is a monster barrier for buyers forming around 0.0124BTC.

On the downside, 0.0120BTC might continue to stall downsides in the near term. If at all sellers manage to clear the stated level, Dash prices may perhaps decline. The Lower Bollinger Band is also positioned around the mentioned support area, pointing toward the importance of area.

Both, the hourly RSI and MACD are in the bearish zone. The only worrying sign for sellers is the fact that there is a minor divergence forming on the RSI. Let us see whether sellers succeed to pierce 0.0120BTC or not moving ahead.

Tags: 100 MADashDash Price Technical Analysisimportant support area
TweetShare
BitStarz Player Lands $2,459,124 Record Win! Could you be next big winner? Win up to $1,000,000 in One Spin at CryptoSlots