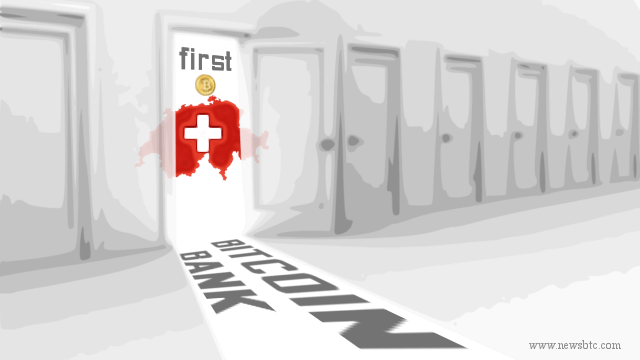 First Ever Bitcoin Bank to be Opened in Switzerland?

Next Article: Bitcoin Price Range Holds; Where are we Looking now?

As a country known for its neutrality and secure deposit vaults, it’s no surprise that Switzerland might actually be on its way to establishing the first ever bitcoin bank. According to a report on Handelszeitung, preparations are already underway for a bitcoin bank to obtain its necessary licenses to start operations.

Multiple sources in the financial industry confirmed that there have been talks with the Financial Market Supervisory Authority and the project initiators who said that they will submit their application for a license within a few weeks.

No Other Bitcoin Bank

For now, there is no other bitcoin bank in existence in Switzerland or anywhere else. Guido Rudolphi, who is an IT specialist among a group of eight people involved in the project, said that they’ve already gotten investors on board and have searched for suitable premises for establishing the bank.

Once this pushes through, bitcoin exchanges and payment processors will no longer have to take long detours through foreign banks to offer their services in the country. This could also facilitate an effective tax avoidance system. The bank will distinguish itself from traditional financial institutions with its clientele, which seeks to generate revenues for the cryptocurrency industry while still having access to conventional banking.

Those involved in the project have declined to release further details on which banks and other bitcoin companies they are working with. Note, however, that Xapo recently decided to move its headquarters to Switzerland to take advantage of the secure cold storage vaults in the country.

Xapo is deemed as the “Fort Knox” of bitcoin for its security and storage services. The company aims to set a new standard in bitcoin storage services and treasury management to become a global and trusted provider. According to their press release, Switzerland;s regulatory stability, international neutrality and its deep-seated tradition in global finance also factored into the decision.

First Ever Bitcoin Bank to be Opened in Switzerland? was last modified: May 29th, 2015 by newsbtc