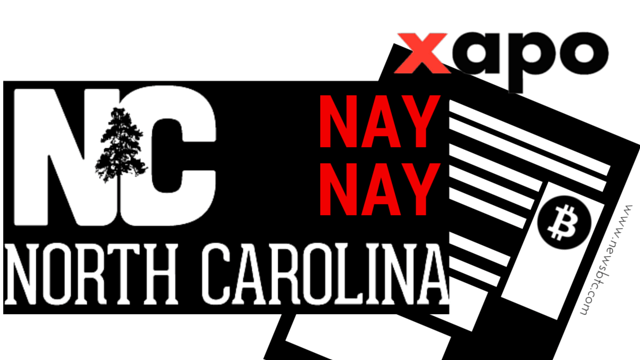 Following the advance of North Carolina’s revamped Money Transmitters’ Act earlier this month, bitcoin services provider Xapo announced that it will no longer be operating in the state. The company cited state-level regulation as the main factor in their decision.

The North Carolina Senate has already passed the bill covering bitcoin services regulation and is pending approval of the state’s governor. Upon this, the bill would mandate minimum net worth requirement of $250,000 for applicants. Businesses would also be required to post a surety bond of $150,000, an amount subject to change based on future transaction volume.

“It is correct that we are not operating in North Carolina. We do not have a money transmitter license in that state and we think the effort to comply with their upcoming bitcoin bills is not justified by the number of customers we have there,” explained Xapo founder Wences Casares.

This has been an observed behavior among bitcoin services companies that are moving headquarters or limiting their services in anticipation of stricter regulation in particular areas. Prior to this, San Francisco-based Coinbase decided to shut down operations in Wyoming until further notice, citing actions taken by the Wyoming Division of Banking.

The implementation of the BitLicense framework in New York also posed a threat to several bitcoin services companies, as the cost of obtaining licenses could hurt profitability and limit innovation. ShapeShift recently shared plans to stop serving the New York market last June. CEO Erik Voorhees explained that the regulators’ access to customer information would pose a larger risk to users, as this might expose the company to more hacking vulnerabilities.

Other states such as San Francisco and cities like London are remaining more open to digital currency industry developments so these areas might be able to draw more bitcoin services companies later on.

Tags: bitcoin north carolinabitcoin regulationBitcoin servicesNews
TweetShare
BitStarz Player Lands $2,459,124 Record Win! Could you be next big winner? Win up to $1,000,000 in One Spin at CryptoSlots