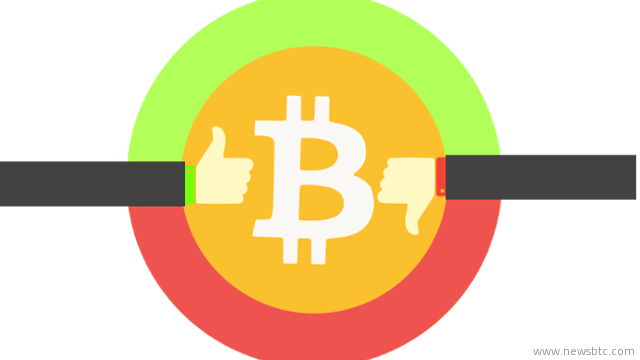 Bitcoin witnessed fresh selling and minor profit booking as bulls failed to keep up the upbeat mood and cross the resistance level. In my previous analysis Stalled!, I had stated that if the bulls struggle for too long below the resistance, then it may eventually lead to a decline. I still maintain my view.

Another pressure point is the outcome of the FOMC meeting which had Janet Yellen ‘mostly optimistic’ on the US economy and raised the expectations that the first interest rate hike may come in as early as September. An increase in interest rates will push demand for the greenback higher, and demand for dollar-denominated assets such as Bitcoin may lose its sheen.

Bitcoin is currently trading at $289.73, down 1.5 percent since yesterday.

Technical analysis of the daily BTC-USD price chart above reveals some interesting points.

Bitcoin Chart Structure – In the immediate term, Bitcoin should find support near $286 – the level around which the cryptocurrency has been stabilizing for the past 5 sessions. A break below this could lead to a fall to sub-$280 levels.

Moving Average Convergence Divergence – The MACD and the Signal Line are on the verge of a bearish crossover, which has depreciated the value of the Histogram to 0.1478.

Momentum – The Momentum indicator is turning its head down but is very positive at 10.7700.

Money Flow Index – Even as the price dips, the MFI has advanced to 70.9169 in a display of divergence. If the price sustains at this level or drops, and the MFI crosses 80, consider getting out of long positions.

Relative Strength Index – The RSI registered a minor dip to 60.0144.

Build short positions on rallies as the supply pressure is overwhelming at higher levels. Bitcoin might drop to $280.