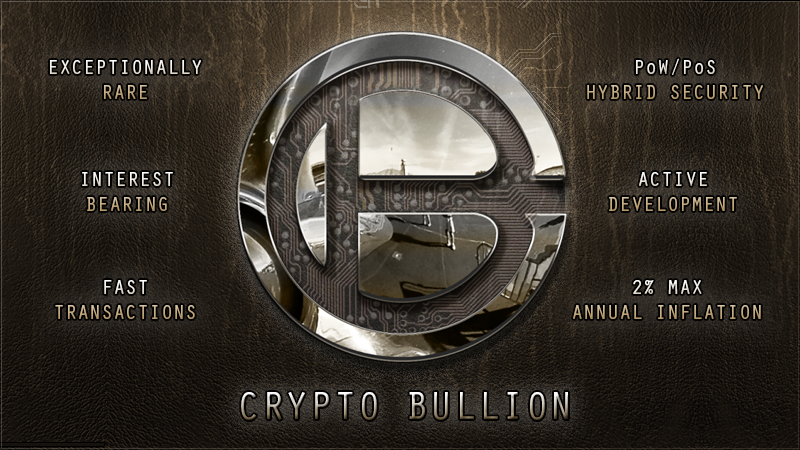 CryptoBullion is one of the oldest alternative digital currencies. In an attempt to innovate and stand out from other cryptocurrency projects, the CryptoBullion team is pleased to announce an unprecedented Proof-of-Stake-Participation algorithm and expansion into the emerging Chinese market.

The CryptoBullion team is extremely interested in keeping CBX on the cryptocurrency technology leading edge. Designed to be rare and valuable, less than 1 million CBX are in circulation, with a variable annual interest rate of over 2% for stakers.

Launched in June of 2013, the CryptoBullion always tried to be an exclusive cryptocurrency. CBX has successfully completed its distribution phase and has reached the planned stage where its money supply grows by 2% per year.

The Team is now starting the development work on the innovative PoSP (Proof-of-Stake-Participation) algorithm to replace the existing Hybrid PoS/PoW. The implementation of PoSP will coincide with a new release of the ‘CBX Vault’ wallet software.

PoSP will maximize network security via a pay-for-work poli

PoSP will insure that a 2% annual interest rate is always paid to the network, regardless of how many CBX are being staked at any given time allowing for a considerably higher interest rate to be awarded to those staking their CBX.

The CryptoBullion team says that “these developments will galvanize a stronger and more united community while attracting new members through innovation. CryptoBullion will provide a low cost of entry and fair-pay-for-fair-work structure that is welcoming to any individual who desires to participate.”

This updated Vault will also feature other features such as chat and a full Chinese translation set, as the CryptoBullion Team is gaining interest from emerging Chinese markets with the assistance of their new Chinese liaison.

The value of CryptoBullion is not determined by how many markets it can directly trade to, nor by how many businesses and individuals will accept and hold it for spending, but from its fundamentals which allow it to serve as a more stable store of wealth. CBX is currently priced at a very attractive rate, relative to its future potential, and available at several exchanges including Cryptsy.

PoSP version 1.0 and the new CBX Vault are projected to be released in the last quarter of 2015.

Tags: alternative currenciesbitcoinChinese marketCryptoBullionHybrid PoS/PoWNewsStaking
TweetShare
BitStarz Player Lands $2,459,124 Record Win! Could you be next big winner? Win up to $1,000,000 in One Spin at CryptoSlots