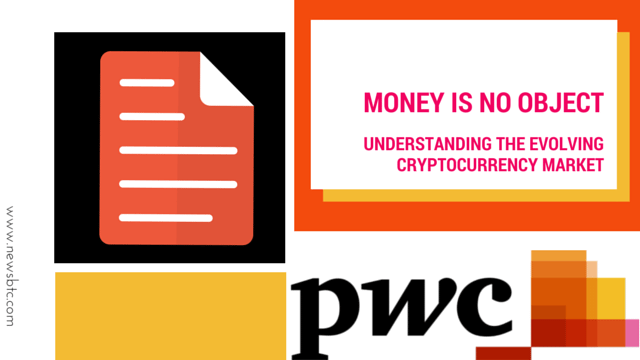 According to a paper titled “Money is no object: Understanding the evolving cryptocurrency market” published by PricewaterhouseCoopers, cryptocurrencies play a role in the development of technology-driven markets. PwC is a multinational professional services network.

It also highlighted how cryptocurrencies “gained acceptance from a critical mass of investors, technologists, regulators, merchants, entrepreneurs and consumers” and that these have the “potential to disrupt conventional market strategies, longstanding business practices, and established regulatory perspectives – all to the benefit of consumers and broader macroeconomic efficiency.”

The PwC paper aims to act as a primer for businesses and investors with a limited understanding of cryptocurrencies. Apart from discussing bitcoin developments, the paper also gives a brief introduction on cryptocurrencies and the underlying blockchain technology.

“Investors speculating in the future possibilities of this new technology have driven most of the current market capitalization, and this is likely to remain the case until a certain measure of price stability and market acceptance is achieved,” the report indicated. From there, it went on to discuss the potential ways in which cryptocurrencies could disrupt existing technologies.

One such example is in securities settlement, in which a blockchain-based clearing system could eliminate the need for middlemen and thereby reduce the time and costs for settlement. This application has been explored and implemented by Overstock, an online retail giant led by Patrick Byrne, which recently launched a bond based on a distributed ledger.

In addition, the PwC report also discussed the role of regulation in the digital currency industry. Its position is that “cryptocurrency will not reach its true market potential unless and until it develops in harmony with applicable regulations.” However, it also mentioned that this could be a difficult feat since “government attitudes toward cryptocurrency are inconsistent, evolving at different paces in different regions.”

Tags: bitcoin researchbitcoin technologycryptocurrencies researchcryptocurrency newsNewspricewatercooperpwc on bitcoinpwc whitepaper
TweetShare
BitStarz Player Lands $2,459,124 Record Win! Could you be next big winner? Win up to $1,000,000 in One Spin at CryptoSlots