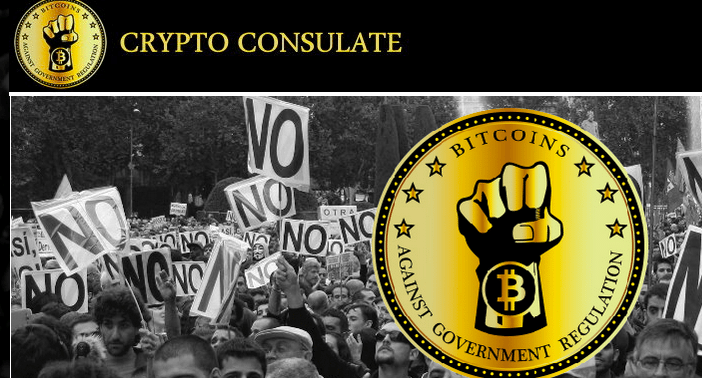 The idea of bitcoin regulation remains a hotly debated topic to this day, as many have claimed that this will just end up stifling innovation. One of bitcoin’s defining characteristics is that it is decentralized, which means that there is no central monetary authority or government overseeing its activity.

The “regulation” and security of the industry are upheld through the consensus-based decision-making model more commonly called the bitcoin protocol, as transactions aren’t considered valid unless they’re verified and recorded on majority of computers in the network.

Some worry that bitcoin regulation by governments would eliminate the anonymous nature of transactions, which is another selling point of the cryptocurrency. Transaction verification is simply done by a network of computers solving complex algorithms in a process known as bitcoin mining.

For Cryptoconsulate, which is an online petition fighting against bitcoin regulation by governments, obtaining regulatory approval has proven to be too costly for companies. In New York alone, BitLicense has led some startups to move operations elsewhere in order to avoid hefty costs associated with compliance.

The group is seeking donations from members of the bitcoin community in order to establish a movement against bitcoin regulation. The group is also inviting readers to sign the online petition on Whitehouse.gov to prevent federal and state governments from regulating the industry.

“Federal Government is allowing states such as New York to set laws regulating the trade of Crypto currencies by providing Licensure requirements above and beyond the means of the common man,” the petition stated. “Crypto currencies are a digital anonymous currency traded by individuals who want their privacy. The government is taking away our right to privacy when trading Crypto currencies by asking for such documentation when applying for a license.” The group is aiming to gather 100,000 signatures by November 3.

Tags: bitcoin governmentbitcoin regulationbitlicenseNews
TweetShare
BitStarz Player Lands $2,459,124 Record Win! Could you be next big winner? Win up to $1,000,000 in One Spin at CryptoSlots