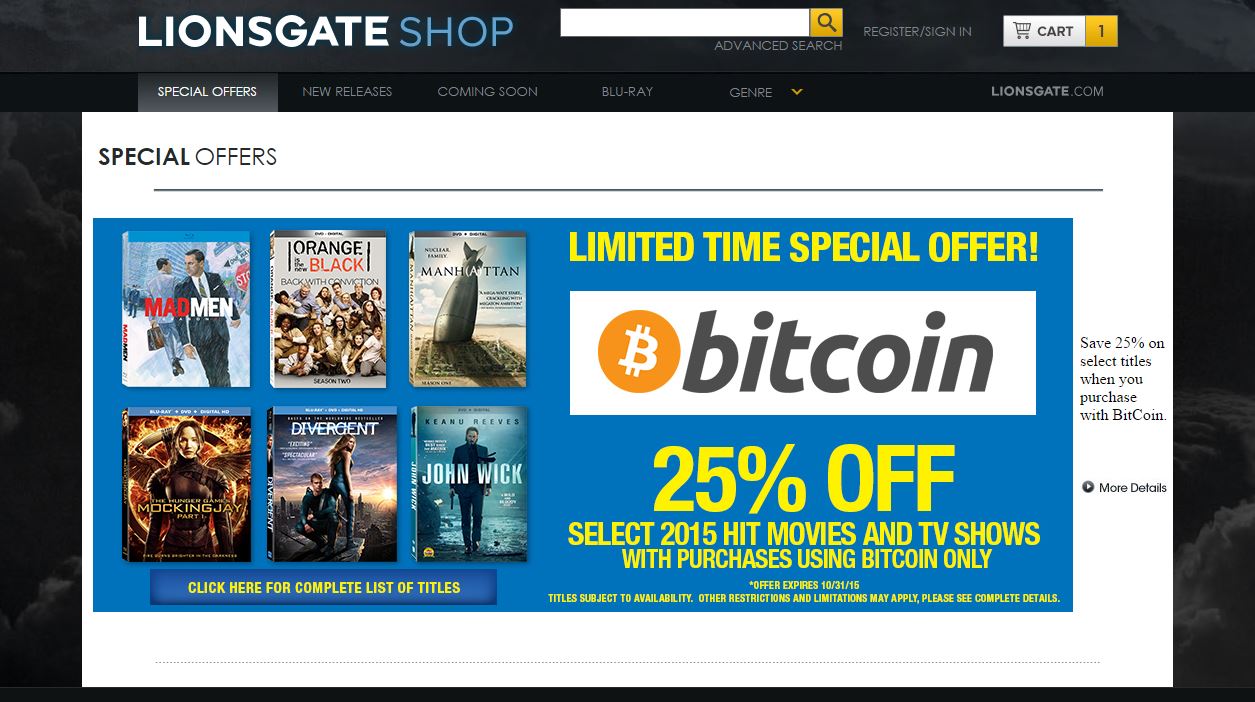 Lionsgate is the latest International Corporation to integrate bitcoin as a payment method at its online shop (LionsgateShop.com).

Lionsgate is a leading global player in the entertainment industry.  The company operates within a diversified presence in motion picture production and distribution; digital distribution; television programming and syndication; video games; new channel platforms, family entertainment and home entertainment. The company worked its way out to become an audience leader and currently has a strong television presence and an array of channel assets in production of prime time cable and broadcast network series, distribution and syndication of programming through Debmar-Mercury.

In an attempt to pursue online innovations that can both benefit the company as well as its consumers, Lionsgate has signed a new partnership with one of the leading digital payments processors, GoCoin. This partnership enables the company to accept bitcoin for Lionsgate’s DVD and Blu-ray discs at the company’s online store, LionsgateShop.com.

Lionsgate first thought to integrate bitcoin payments into some selected consumer sales operations such as VOD and DVD. The agreement between the two companies was announced today.

“Lionsgate has proven itself to be an innovator among Hollywood studios in its content, marketing and business strategies, and we’re delighted to partner with a company that shares our vision of a currency ecosystem that offers consumers the power of choice.”

Lionsgate is also continuing to explore additional opportunities to integrate digital currency and the blockchain technology into its merchandising and sales activities.

“Our acceptance of bitcoins at our online Company shop reflects our commitment to offer greater choice, convenience and accessibility to our next generation consumers. Our goal is to offer them greater choice in what they watch, where they watch it, how they watch it and how they pay for it.”

The company’s home entertainment business has grown to more than 7% market share and is an industry leader in box office-to-DVD and box office-to-VOD revenue conversion rate. Along the announcement, the company is also having a promotion where consumers paying with bitcoin have a discounts up to 25%.

With this move the entertainment brand becomes the first company in the filming industry to accept digital currency as a way of payment for their consumers.

Tags: accepting BitcoinbitcoinBitcoin NewsgocoinLionsgateNews
TweetShare
BitStarz Player Lands $2,459,124 Record Win! Could you be next big winner? Win up to $1,000,000 in One Spin at CryptoSlots