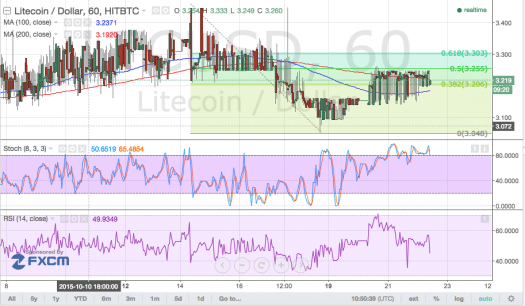 If the correction wave for litecoin price is done, the impulse wave could take price down to the previous lows at 3.050 or much lower.

Apart from the inflection points already keeping gains in check, leading and lagging indicators suggest that litecoin price is ready to head back south. The 100 SMA is moving below the 200 SMA, which means that sellers are in control of price action and are more likely to allow the downtrend to resume.

In addition, stochastic is indicating overbought conditions. This means that the previous rally might already be exhausted and that it’s time for the impulse wave to take place.

RSI is also on the move down but is already halfway into the drop, still indicating that there’s enough selling pressure left for a test of the previous lows. Further bearish momentum could take litecoin price down to the next psychological support at 3.000.

On the other hand, a surge in bullish pressure could lead to an upside break of the short-term consolidation and a move towards the swing high at 3.4000.