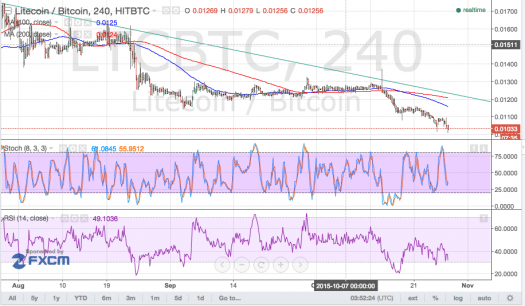 Litecoin price could be in for a correction from its recent selloff, as a bullish divergence can be seen from stochastic.

Stochastic has been making higher lows while price recently made lower lows, creating a bullish divergence visible on the 4-hour chart. RSI has also formed higher lows and is on the move up, which suggests that buyers could be in control for now.

If litecoin price is able to pull up from its recent dive, it could make another test of the falling trend line resistance near the moving averages. The downtrend is likely to carry on, though, as the 100 SMA is below the 200 SMA.

The trend line also coincides with a short-term area of interest at the 0.0120 level. Litecoin price has previously consolidated above this support zone, which might now hold as resistance.

Tags: litecoin pricelitecoin technical analysislitecoin trading
TweetShare
BitStarz Player Lands $2,459,124 Record Win! Could you be next big winner? Win up to $1,000,000 in One Spin at CryptoSlots