In Conversation with TGBEX, Company which Create Physical Bitcoin 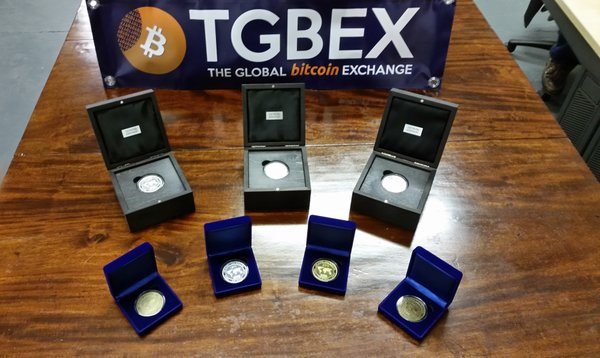 TGBEX Limited is on a mission to spread bitcoin ownership and awareness. They manufacture physical bitcoins, which are offline wallets, with the public and private bitcoin keys engraved on the back of specially designed coins. Based in the Isle of Man, TGBEX is operated by Adrian Forbes (a qualified accountant & investment advisor) and David Bailey (who has a long-standing involvement in the physical bitcoin community, as the CEO of HardBTC.org). The physical bitcoins were launched in September 2014, with the first coin manufactured being donated to the local Manx Museum. The coins have been featured in Bloomberg Magazine and on the BBC website/ Radio and have even made an appearance on Bloomberg TV.

We caught up with Adrian and had the chance to ask him a number of questions:

NEWSBTC: What got you into bitcoin and physical coin manufacturing?

Adrian: I have a background in fund administration for venture capital and private equity funds, so seeing them get involved initially got me interested, plus I studied Economic and Social history so the more I looked into bitcoin, the more potential benefits I could and continue to see.  What got me into physical bitcoins, was searching for a way to buy my children a bitcoin each.  After a lot of research, I came across Casascius coins which I loved, but it was around the time it was shut down by FinCen and the prices soared.  I believe physical bitcoins are the ideal way to introduce new people into bitcoin and thought I could use my experience of setting up controls and processes and dealing with regulators to set up TGBEX.

What makes your physical coins different to others out there?

We spent a great deal of time looking at the market before we launched and were very worried about the possibility of counterfeit coins, so have invested significant amounts in specialist machinery and dies to produce highly detailed coins that would be hard to copy and we also have registered trademarks to discourage forgers.  Every coin is numbered, the holograms are hand cut and each comes with a Certificate of Authenticity signed by two people, so we think our attention to detail is the main difference. Our packaging is also designed to appeal to someone who has never heard of bitcoin, so we use jewellery type gift boxes and include a short booklet explaining bitcoin, physical bitcoins and instructions on how to redeem the coins.

What would you say are the biggest challenges for a physical bitcoin manufacturer?

Security is obviously of paramount importance and the biggest challenge, so we have strict controls and processes to protect the security of bitcoin keys and to ensure the coins are not compromised in any way. All the keys are generated offline, the keys are engraved via a CAM process to avoid any errors and the only record of any private key is on the coins. Getting the coins ‘out there’ and marketing the coins to a public still relatively unaware, or wary of bitcoin is also a huge challenge.

On your website you sell up to 20BTC coins, does this bring additional risks and why is the lowest value you sell 0.5BTC?

I guess we see bitcoin as a long term investment, so for this market a 0.5BTC coin, which currently retails for approximately £200, or 1BTC coins which retail for approximately £350 is not a huge amount of money. Selling 10BTC and 20BTC coins (which are only upon request, due to the need for us to collect KYC/ AML/ ID) is a different market, so these coins are made from solid silver, are hallmarked and come in deluxe hand-made boxes. Selling the higher value coins does certainly bring additional risks in terms of meeting regulations, insurance and price volatility, but if selling outside the UK/ Ireland, we will normally fund these coins once a customer has confirmed receipt.

You mentioned price volatility – is this something that impacts TGBEX a lot?

Definitely, we have a UK banking relationship, because we operate under a retail model so we have to maintain a stock of 50-60 bitcoins at any given time and most of the coins to date have probably been sold at a loss, but we have been repurchasing bitcoins at lower levels and believe in the long term value of bitcoin. We shouldn’t be asking other people to invest if we didn’t believe in it ourselves, though we emphasise the high risk nature of bitcoin and the likelihood that it will either be worth a lot or nothing.

Do you have any plans for the future you could tell us about?

We have a small number of silver 50 BTC coins and even a few solid 24ct gold 100BTC coins that we might launch, but these would obviously increase the company’s risk profile and would do little to help spread bitcoin ownership amongst as many people as possible, so these have been mothballed for the past 6 months. As an exclusive, we are about to launch a promotion to giveaway AussieBTC 0.01BTC coins, with any order paid for in bitcoin. We have also held tentative discussions with crowd-funding sites and would love to market the coins in the mainstream media if there was enough interest and support to do this.

Tags: bitcoin exchangeInterviewstgbex
TweetShare
BitStarz Player Lands $2,459,124 Record Win! Could you be next big winner? Win up to $1,000,000 in One Spin at CryptoSlots