Bitcoin Black Friday 2015 – No Place for an Apple To Fall! 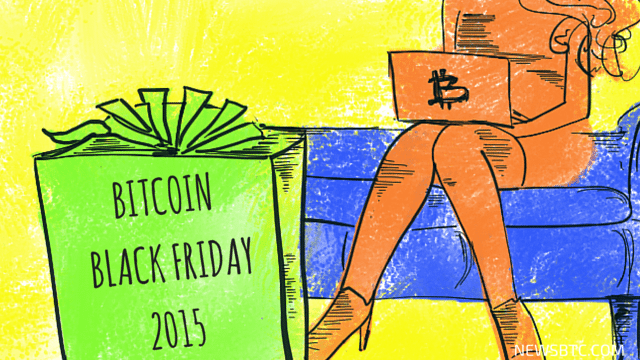 Bitcoin can surely turn your Black Friday’s shopping experience into an interesting “bargain hunting” adventure. In the USA, Black Friday is a term used to describe the day following Thanksgiving, and it flags the beginning of the Christmas shopping season, especially that most US merchants offer special discounts for their customers on that day.

I got a chance to interview Jon Holmquist, the owner of Bitcoin Black Friday

Can you tell us a bit about the Bitcoin Black Friday?

Jon: It is a one day website event where merchants can list the deals they’re offering their customers on Black Friday and anyone who is interested in spending bitcoins on Black Friday can go to the website and see all the merchandise offered. I started this in 2012, back when I was working with a bitcoin merchant who sold gold and silver online, and we were doing Black Friday sale and I noticed a couple of other merchants were doing bitcoin Black Friday sales as well, so I reached out to them and asked if they would be interested in doing a sort of a big pre-Black Friday sale together, so we combined all of our offers together in one place and sent a couple of press releases to the mainstream media and back then, Silk Road was a huge thing and so, many people were thinking that bitcoin is only used for buying illicit drugs and other illegal stuff, so essentially the whole campaign started to tell people that bitcoin can also be used to by legal stuff.

Is your site only up in November? or is it up all the year through?

It’s up all year round, but no one really visits it except in November as we only focus on doing the event only once per year.

How were your Bitcoin Black Friday events DUring the past three years? Did they attract a lot of customers?

In 2012, we had around 50 merchants. I was actually planning on having 10-20 merchants but more merchants signed up and it was very hectic. In 2013, there was a big bitcoin price spike, as it went up to 12 hundred dollars a coin, so there were a lot of consumers spending on that day. Everyone was super excited about bitcoin and we even had a couple of merchants who started accepting bitcoin on that day as bitcoin was trending and everyone wanted to get on the train. In 2014, it was a bit of a difficult year for us, because the price was much lower than it had been a year previous, but the nice thing was that there were a lot of companies accepting bitcoin already. This year, the price hasn’t gone up where we all want it to be, but it is somehow better than last year, and the magnitude of merchant adoption has been relatively linear.

Are there any special surprises to look up to during this year’s event?

Well, we try to do something new each year e.g. last year, we tried to do some real life events and gather together all merchants who accept bitcoin, but this year, we’re only focusing on bringing bitcoin merchants together online to promote their deals.

How will your web page change on the 27th of November?

Right now, sellers can enter their products’ specifications to be enlisted on our website, while buyers can enter their emails to receive a notification when Bitcoin Black Friday begins. On the 27th, the page will transform to enlist all the deals and offers available as our merchants offer a percentage off their items on that special day. So, the buyers will see a deal box that includes the merchant’s name, percentage of discount and a link that takes them to the merchant’s site or a landing page where they can get their discount coupons.

Do you have any exclusive news for NewsBTC?

Sure, Amagi Metals will be offering some great deals on our website on Black Friday. Also, Beefjerky will be listing some awesome deals too.

If you’re interested in participating in this event, visit Bitcoin Black Friday to sign up for their newsletter to seize some bitcoin deals!

Tags: Bitcoin Black FridayBitcoin newsbitcoin saleblack fridayInterviews
TweetShare
BitStarz Player Lands $2,459,124 Record Win! Could you be next big winner? Win up to $1,000,000 in One Spin at CryptoSlots