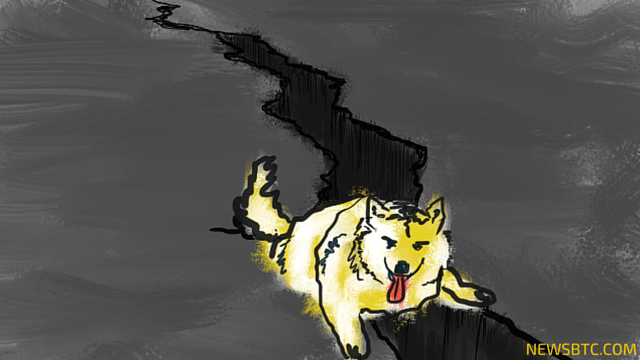 Dogecoin price showing a lot of bearish signs on the 4-hours chart, as it broke a support trend line and settled below the 100 moving average.

We stated in yesterday’s post that Dogecoin price may slide slowly and trade lower. There was a downside reaction Intraday, as the price moved below a major support trend line on the 4-hours chart (price feed from CEX.IO). One key aspect to the recent trend line break is the fact that the price broke the 100 simple moving average (MA), and settled below it.

The price may have created a short-term top, as it failed to clear the 61.8% Fib retracement level of the last wave from the 47.0 Satoshis (high) to 29.0 Satoshis (low). There were more than four attempts to break the stated fib level, but sellers managed to defend it successfully. As a result, there was a downside push, taking the price below a major support area of 38.0 Satoshis.

There was an increase in volatility as can be visible on the hourly chart (price feed from HitBTC). The price is trading near a triangle support trend line and struggling to hold the ground. It looks like the price is under a lot of bearish pressure and may trade further lower in the short term.

4H MACD – The 4-hours MACD is under a major convergence, suggesting more losses moving ahead.

4H RSI – The RSI is below the 50 level, and pointing that sellers are in control and buyers are struggling to step in.