Winners of the 100 Bitcoin Trading Challenge 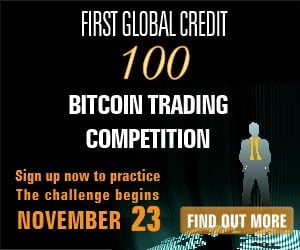 First Global Credit, one of the world’s first companies that allows people to hold onto their bitcoins while using them to generate profits recently hosted the most successful in its series of market trading competitions, the 100 Bitcoin Trading Challenge. Over 1,300 players participated using a demonstration platform to trade high growth stocks, ETFs and bitcoin FX. There were 3 competition winners but players participated from Malaysia, Thailand, Venezuela, Panama, Brazil, South Africa, Australia, Mexico, Costa Rica, Guatemala, Israel, Germany, Spain, France, Switzerland and even Lichtenstein.

There were three divisions in the competition based on different profit generation strategies including stock trading, currency trading and those who made profits by trading both stocks and currencies. Of the three winners residing in the US and UK, two of them have won previous competitions hosted by First Global.

Most Profit from Stock Trading

Michael Caruso, who traded with the username carusom made the most profit from stock trading during the competition. As a professional stock and option trader in the U.S., Caruso has been trading stocks close to 6 years. He had a more negative outlook on bitcoin early in 2015 but has been bullish on bitcoin since this summer.

Interviewer: How did you find out about First Global Credit and the competition?

Michael Caruso: This is my second time trading the competition, the first time I heard about First Global Credit was during the first promotion slightly after launch in November 2014. A co-worker informed me about the contest and suggested I should enter.

Interviewer:  Do you trade for a living?

Michael Caruso: Yes, I trade US listed equities, options, shells and as a hobby crypto-currencies.

Interviewer: How long have you been involved in bitcoin?

Michael Caruso: I first heard about bitcoin in 2010 through a slashdot posting around the time first exchange went live. I did not start paying serious attention to it again until 2013.

Interviewer:  How did you get your bitcoins?

Michael Caruso: I was gifted bitcoin (.5 BTC) in 2011 during the first bubble from a friend but only began buying bitcoin in 2014; I buy bitcoin via Coinbase and Circle.

Interviewer: What kinds of trading strategies do you trade?

Michael Caruso: I used breakout trades on high ATR (average true range) stocks, in this particular month I was picking stocks attempting to breakout of falling wedge patterns on beaten down names.

Interviewer:  What stocks did you trade? Did you use Currency Switch to move out and into bitcoins?

Michael Caruso: I traded a few stocks but my most successful were Tesla Motors [TSLA] and SolarCity Corporation [SCTY] a renewable energy company which had price extensions due to favorable government rulings in mid-December. I did not use the currency switch option.

You can read the rest of Michael’s interview here.

Most Profit from Currency Trading

Kipp Watson made the most profit with currency trading.

Interviewer: What interested you about the 100 Bitcoin Trading Challenge?

Kipp Watson: At first it was the idea of being able to win 20 BTC in a competition where I did not have to advance any money. After a while it was the idea that I could get real interesting bragging rights if I win this. Competing in this contest really helped me to polish and hone my analytical skills a bit.

Interviewer: Do you trade for a living?

Kipp Watson: I do not trade for a living, but I am a Bitcoin Consultant in the Albuquerque area of sunny New Mexico. I am looking to work with a few worthwhile charities to help them augment their streams of contribution by using bitcoin. Did you know that if you donate BTC to a tax exempt organization, the gain in your bitcoin is not taxed and the new gain basis for your donated BTC is its market value at the time of the contribution? This can have enormous consequences for the estates of many charitable donors.

Interviewer: How long have you been involved in bitcoin?

Kipp Watson: The word ‘involved’ can mean a lot of different things. I’ve always been somewhat of a student of futuristic technology and I probably first heard of bitcoin sometime in 2011. But I did not have the savvy to handle mining or the security requirements of a cold wallet at that time. I bought my first bitcoin in January, 2013 at $13.80 each.

Interviewer: How did you get your bitcoins? Did you mine them? Buy them on an Exchange? Trade with friends?

Kipp Watson: I tried to buy a mining rig from TerraHash in mid-2013, but a fraudster ran off with about 86 of my BTC. So I had to buy my bitcoin. I remember having difficulty getting my bank to wire funds internationally so I could get bitcoin on the Mt. GoX exchange. But I found a way to do that with another bank and, of course, I never relied on an exchange’s wallet. That approach saved my butt from the Mt. GoX implosion. I have also bought BTC at Coinbase.

Interviewer: Do you belong to any bitcoin related groups?

Kipp Watson: I hang out at some IRC chat rooms where there is talk of bitcoin. I also am an early member of the Bitcoin Foundation.

Most Profit from Stock and Currency Trading

Aaron Welton, who traded with the username Grandad is a 32-year-old self-employed computing professional residing in Surrey, UK. Aaron has been involved with bitcoin since 2013.

Interviewer: How did you first find out about bitcoins?

Aaron Welton: I first found out about bitcoins after reading an article on the Cryptolocker Ransomware that demanded bitcoins as payment. I started reading up on bitcoin and was very intrigued. I became nearly obsessed with the technology and alt communities around it.

This is the third competition Aaron has entered.

Aaron Welton: I was disappointed with my performance in the first competition so upon entering the second time I wanted to be prepared. I understood trading Altcoins, I wanted to have the same level of knowledge about stocks and stock trading. Aaron was one of two winners in the Summer competition.

Aaron Welton: I am based in the UK so I use a service like Bittylicious, I have also done a fair bit of mining over the last 2 years – Bitcoin (antminers) and many other altcoins. (r9 280x x2)

Interviewer: Do you trade for a living?

Aaron Welton: I trade for fun and the experience.

Interviewer: Tell us about any memorable trades you made during the competition?

Aaron Welton: I did well with a short on Netflix that made 22 BTC.

Interviewer: What do you think about the future of bitcoin and what does it mean to you?

Aaron Welton: I think 2016 will be great for Bitcoin and other crypto currencies like Ethereum.

You can track Mike, Kipp and Aaron’s performance by following First Global Credit on Twitter or Facebook. First Global Credit is planning a major service launch on January 11, 2016. We (NewsBTC) will have all the information on the service and how it can be used to generate bitcoin profits.

Create an account today at: https://www.firstglobalcredit.com/register. It’s free and you can practice in advance of the next competition.

Tags: bitcoinBitcoin newsbitcoin tradingFirst Global Credit
TweetShare
BitStarz Player Lands $2,459,124 Record Win! Could you be next big winner? Win up to $1,000,000 in One Spin at CryptoSlots