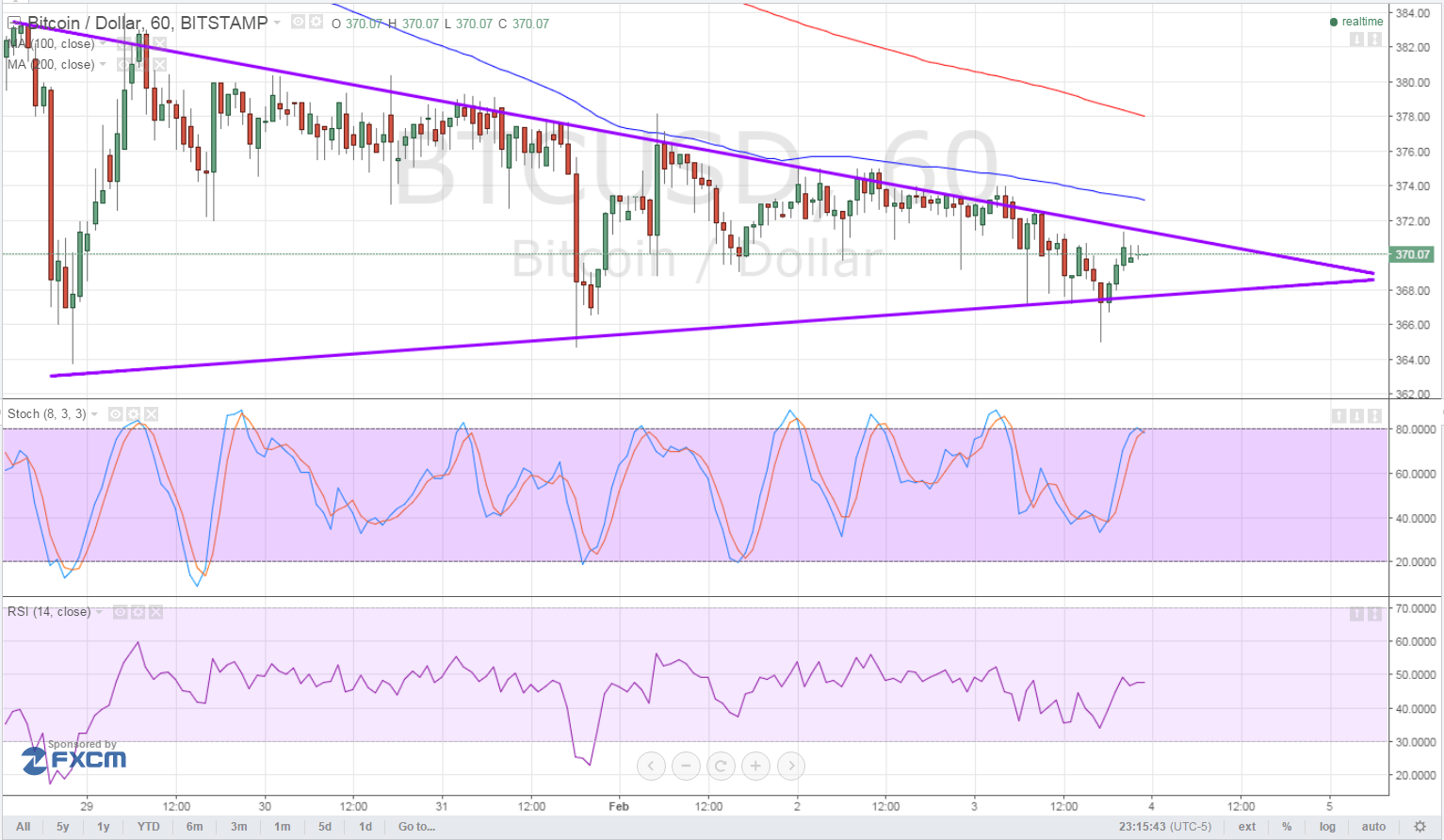 Dollar-selling yielded a strong bounce in bitcoin price yesterday but this wasn’t enough to result to a breakout move from the triangle pattern.

Bitcoin price is gearing up for a test of the resistance just below $372 and the 100 SMA. This short-term moving average is still below the longer-term 200 SMA, which confirms that the path of least resistance is to the downside.

In addition, stochastic is already approaching the overbought region, indicating a possible return in selling pressure. Once the oscillator turns from the overbought level at 80.0, bitcoin price might resume its drop.

On the other hand, RSI is on the move up. This signals that buyers could still be in control of price action, potentially leading to more gains for bitcoin. With that, an upside break past $372 could be enough to show that an uptrend is underway.

A breakout in either direction could lead to gains or losses of around $20, which is roughly the same height as the triangle pattern. With that, a downside break of the triangle support at $367 could lead to a drop to $347 and a rally past $372 could take it up to $392 or onto the psychological resistance at $400.

So far, bitcoin price gains can be attributed to dollar weakness, after Fed officials have recently downplayed the possibility of a March rate hike. In his testimony yesterday, Fed official Dudley said that financial conditions are significantly tighter since their December liftoff, which suggests that they might not be eager to make additional tightening moves soon.

Also, he mentioned that the global slowdown poses a threat to the US economy and it doesn’t help that dollar appreciation is putting a lid on inflation. This forced dollar traders to lighten up on their long positions, allowing bitcoin price to bounce in the process.

Data from the US economy has also been unimpressive, as the ISM surveys have shown weaker than expected manufacturing and non-manufacturing PMI readings. These also revealed declines in the employment sub-index, hinting at a possible downside surprise for the NFP.

On the flip side, the ADP report showed a slightly stronger than expected reading so there might still be a chance of an upside NFP surprise and strong dollar gains. However, for now, traders seem hesitant to take on more dollar long positions especially since risk appetite has improved on the bounce in oil prices.

Updates on the OPEC meeting for this month could continue to impact overall market sentiment and thereby bitcoin price action, as the cryptocurrency tends to gain ground on risk-on days and lose traction on risk-off days.