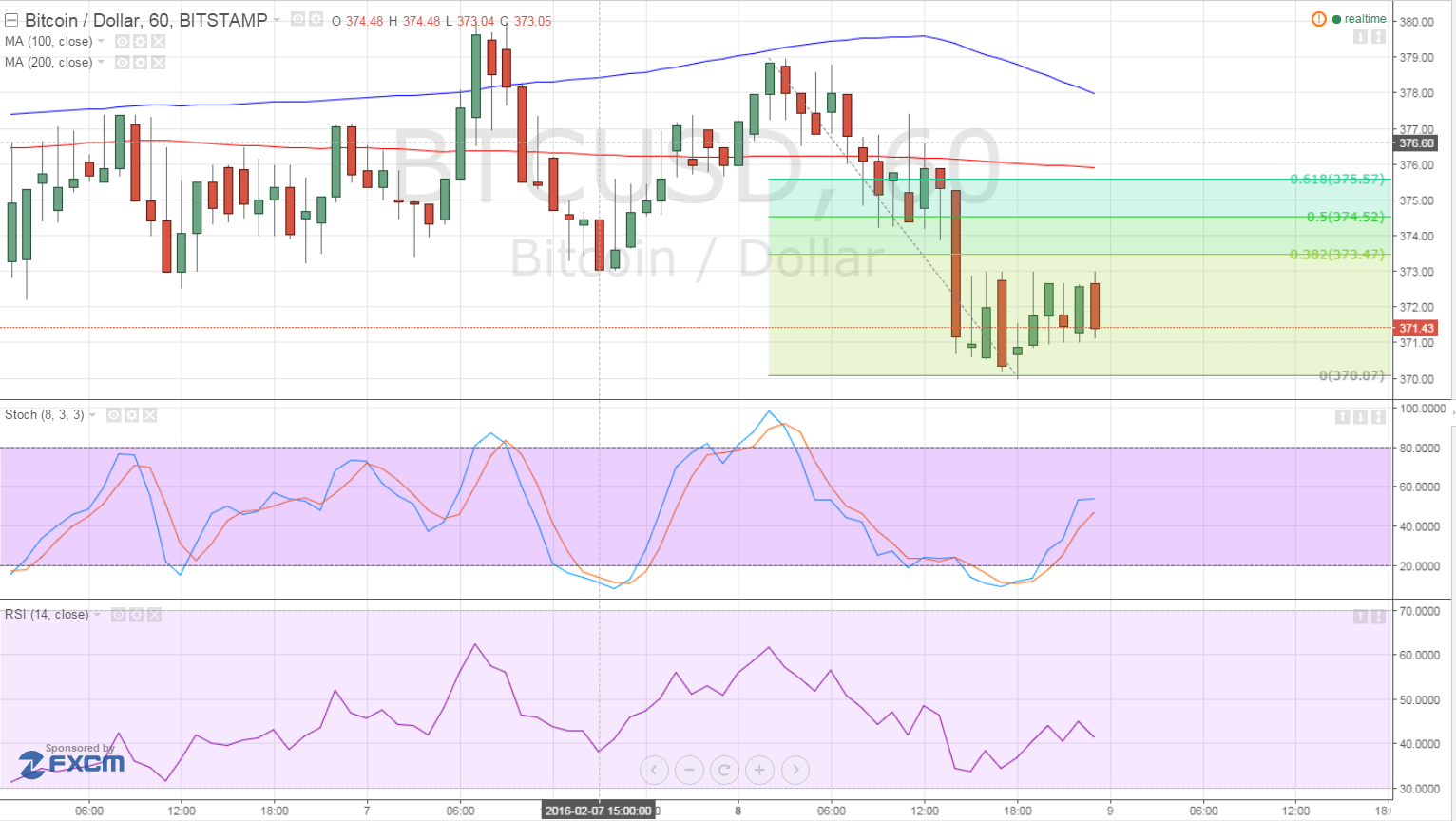 Bitcoin price showed bearish momentum but sellers might need to make a correction before taking it lower. Technical indicators are giving mixed signals for now.

Using the Fib tool on the latest breakout move shows that the 38.2% correction level lines up with a broken short-term support around $373. the 61.8% Fib is close to the 200 SMA, which typically acts as a dynamic resistance level.

However, the 100 SMA is still above the 200 SMA so the path of least resistance might be to the upside and bitcoin price could go for another round of gains. A downward crossover appears to be brewing before more sellers could join the fold.

Stochastic is on the move up so bitcoin price might follow suit. RSI is making its way out of the oversold region, also indicating that buyers could gain traction and push bitcoin price further north to the 100 SMA resistance around $380.

If sellers stay strong, a break below the near-term consolidation pattern could occur, taking price down to the next support at $350 onto $300. This could depend on market catalysts for the week.

Unfortunately there are no major reports on deck just yet, as traders might have to wait until the latter half of the week before getting more clues. Fed Chairperson Yellen has a speech lined up then and dovish remarks could mean dollar losses, which could prop bitcoin price up.

On the other hand, upbeat remarks on the US economy could renew hopes of a March hike, likely driving the US dollar up against its higher-yielding peers. Keep in mind that risk-off moves were seen yesterday as commodity prices tumbled again and the absence of Chinese traders resulted to more volatile price action.

Should this behavior persist throughout the week, bitcoin could be in for more declines. Other event risks include the UK manufacturing production data, euro zone preliminary GDP reports, and the US retail sales release.

Zooming out to the daily chart reveals that bitcoin price is still hovering at the bottom of its longer-term consolidation pattern. The symmetrical triangle is still intact and a bounce off the support might still be possible, taking bitcoin price to the top of the formation around the $450 area.

On the other hand, a strong break below the triangle support could pave the way for longer-term declines in bitcoin price. For now, the 100 SMA is safely above the 200 SMA on this time frame but both stochastic and RSI are pointing down, indicating that selling pressure might be building up. Note that bitcoin price has just broken below the dynamic support at the 100 SMA.