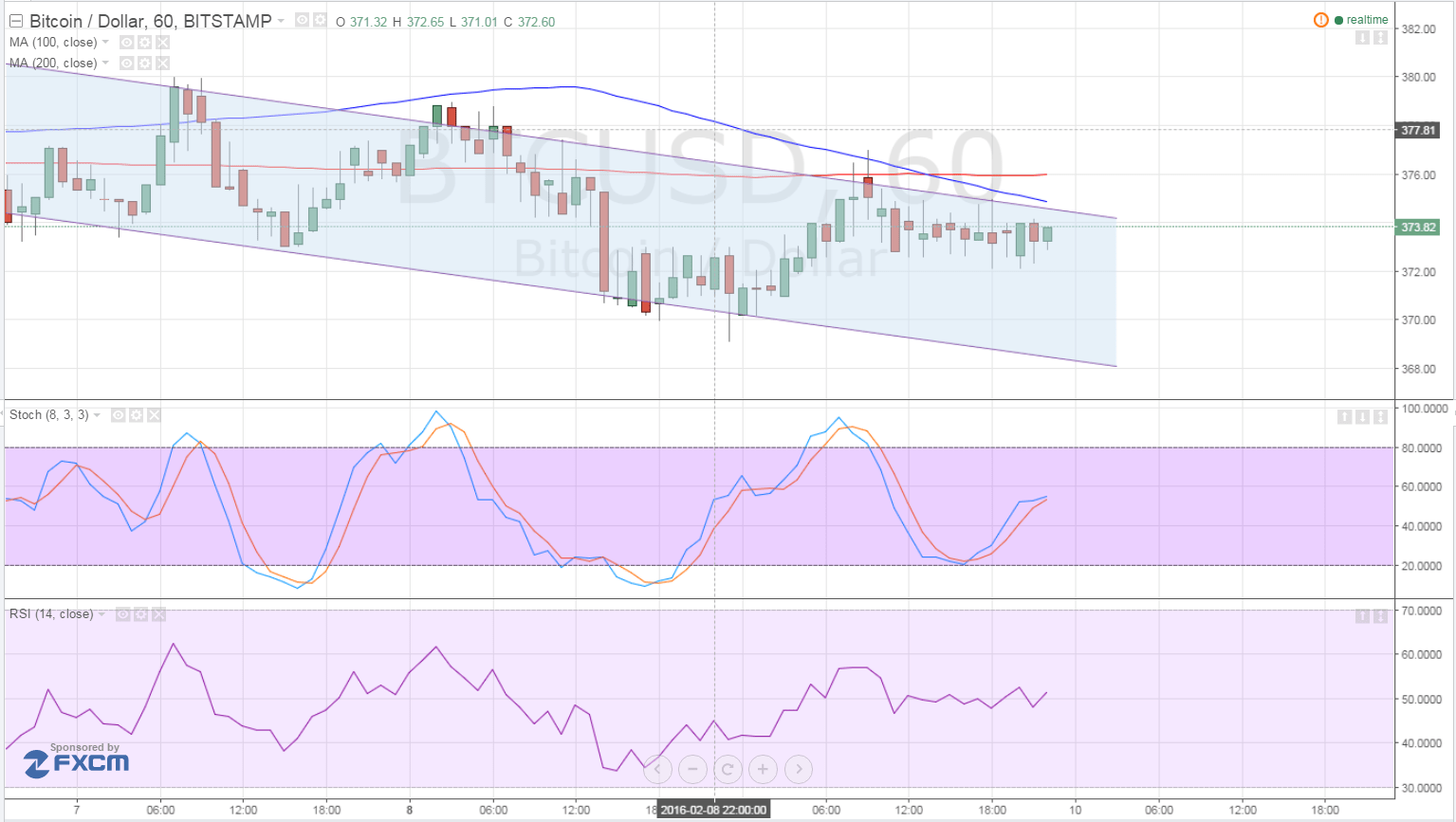 Bitcoin price could be due for either a bounce or a break of the channel resistance, depending how the top-tier catalysts today turn out.

The 100 SMA is below the longer-term 200 SMA, which suggests that the path of least resistance is to the downside. A break below the sideways pattern just above $372 could indicate a pickup in bearish momentum and a possible selloff to the channel support at $368.

Stochastic is on the move up, though, which means that bitcoin price might follow suit. Similarly, RSI is on middle ground on its way higher, so bulls might still be in control.

In that case, an upside break past the channel resistance around $374 could be enough to confirm that an uptrend is forming. Bitcoin price could still encounter a bit of resistance at the 200 SMA dynamic inflection point before heading further north.

Traders are waiting for Fed Chairperson Janet Yellen’s testimony today, as this might contain clues on when the Fed’s next rate hike might be. Last week, FOMC officials have given mostly downbeat remarks focusing on weaker inflation trends and the negative impact of dollar strength, dousing hopes of another tightening move before the end of this quarter.

Still, if Yellen decides to highlight the strength of the US economy and brush off the latest bout in financial market volatility, the US dollar could advance against other currencies and cryptocurrencies. This could spur a bounce off the short-term channel resistance and even a break of the support onto new lows closer to $350.

Stronger selling pressure might even mean more losses for bitcoin price until $300, but this could be unlikely since Fed head Yellen is also typically cautious. On the other hand, downbeat remarks on the US economy could lead to an upside break past the channel resistance and strong rallies for bitcoin price.

As mentioned in the previous article, bitcoin price is stuck in consolidation on the longer-term time frames, finding support at a symmetrical triangle pattern and attempting to head back to the top.

However, price is already approaching the peak of the triangle pattern, which means that a breakout is bound to take place sooner or later. Technical indicators on this time frame appear to favor a downside break.

With the low liquidity in the financial markets this week due to the Lunar New Year holidays in China, any news events could spur volatile moves. A convincing move below the $370 handle could set the tone for a prolonged downtrend in bitcoin price.