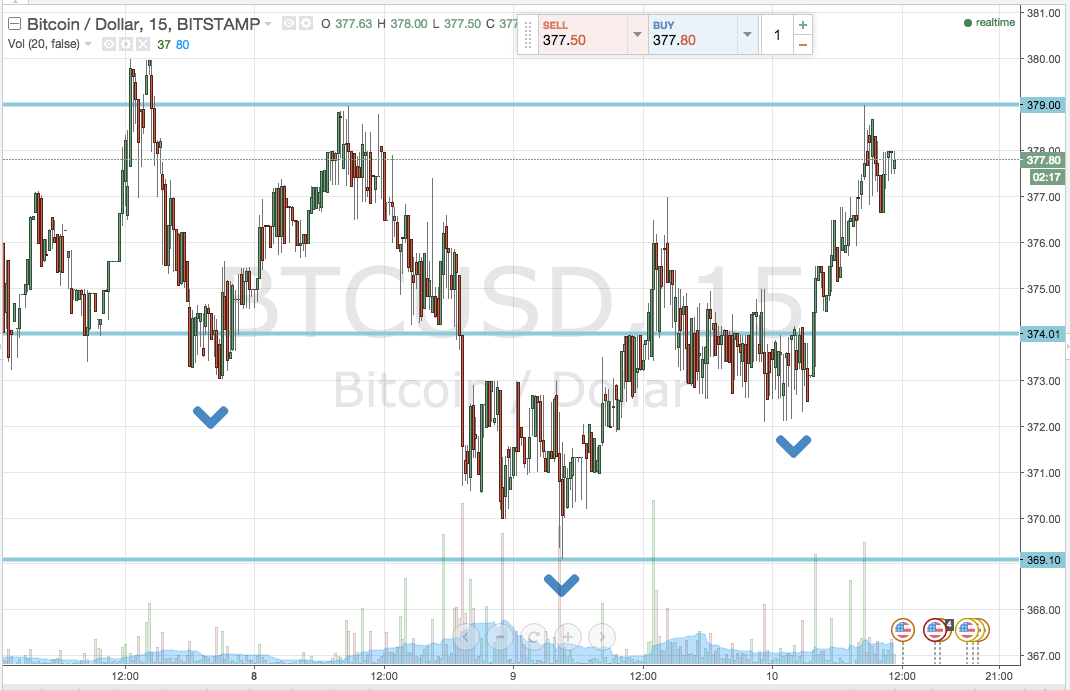 In the introduction to yesterday’s analysis, we noted that we remained in a trade from Monday’s session and – as such – wouldn’t be getting in to any fresh trades before we were taken out of the ongoing entry – be it for a stop loss hit or a target take out. We had run down towards our target, but reversed short, and – at time of writing yesterday – were trading a lot closer to our stop than our target. As things turned out, we got taken out for a stop hit, and went into yesterday evening’s session out of the market. This means we’re free to get in and out as we please today, and just as well, since there’s an enticing pattern forming on the intraday chart.

Those who follow the NewsBTC technical analysis pieces, and in particular this bitcoin price watch report, will likely be familiar with the head and shoulders pattern. For those that aren’t, it’s a classical technical pattern that forms at the end of an uptrend, and signals a longer term reversal and the start of a downtrend. Well, at the end of a downtrend, it also acts as a bullish reversal signal if it forms in the inverse form. Essentially, this form is a trough, followed by a lower trough and – in turn – a second trough the same depth as the first. The three troughs represent the shoulder, head and shoulder of the pattern respectively (imagine the pattern on the upside, inverse form to get an idea of where the name comes from!) The two shoulders form what’s called a neckline (which we’ve highlighted on the chart below) and when price breaks this neckline, in this instance to the upside, it signals a bullish entry towards a target equal to the height of the gap between the neckline and the head’s low.

This pattern is going to take precedence in today’s trading, as it offers a nice, aggressive upside entry – something we’ve been missing for the last week or so. If you are looking for something a little more conservative, however, we’ll also outline the key levels and range to watch for a breakout strategy.

So, without further ado, take a quick look at the chart to see both the pattern and the range in focus. It’s an intraday, 15-minute chart showing the last 48 hours or so.

As the chart shows, the neckline comes in at 379 flat, and this also serves as today’s in term resistance. In term support sits at 374 flat- the same range we defined during yesterday’s session.

So, as mentioned, if we close above the neckline it will signal a long entry, with a target of ten dollars to the upside – somewhere in the region of 390 flat. A stop just south of the neckline, somewhere around 377, defines our risk on the trade. This trade also fits with the breakout strategy upside entry, with a more conservative target at 386.

Looking to the downside on the breakout side of things, a close below 374 validates a short position towards 369.10, with a stop at 375 holding our risk positive.