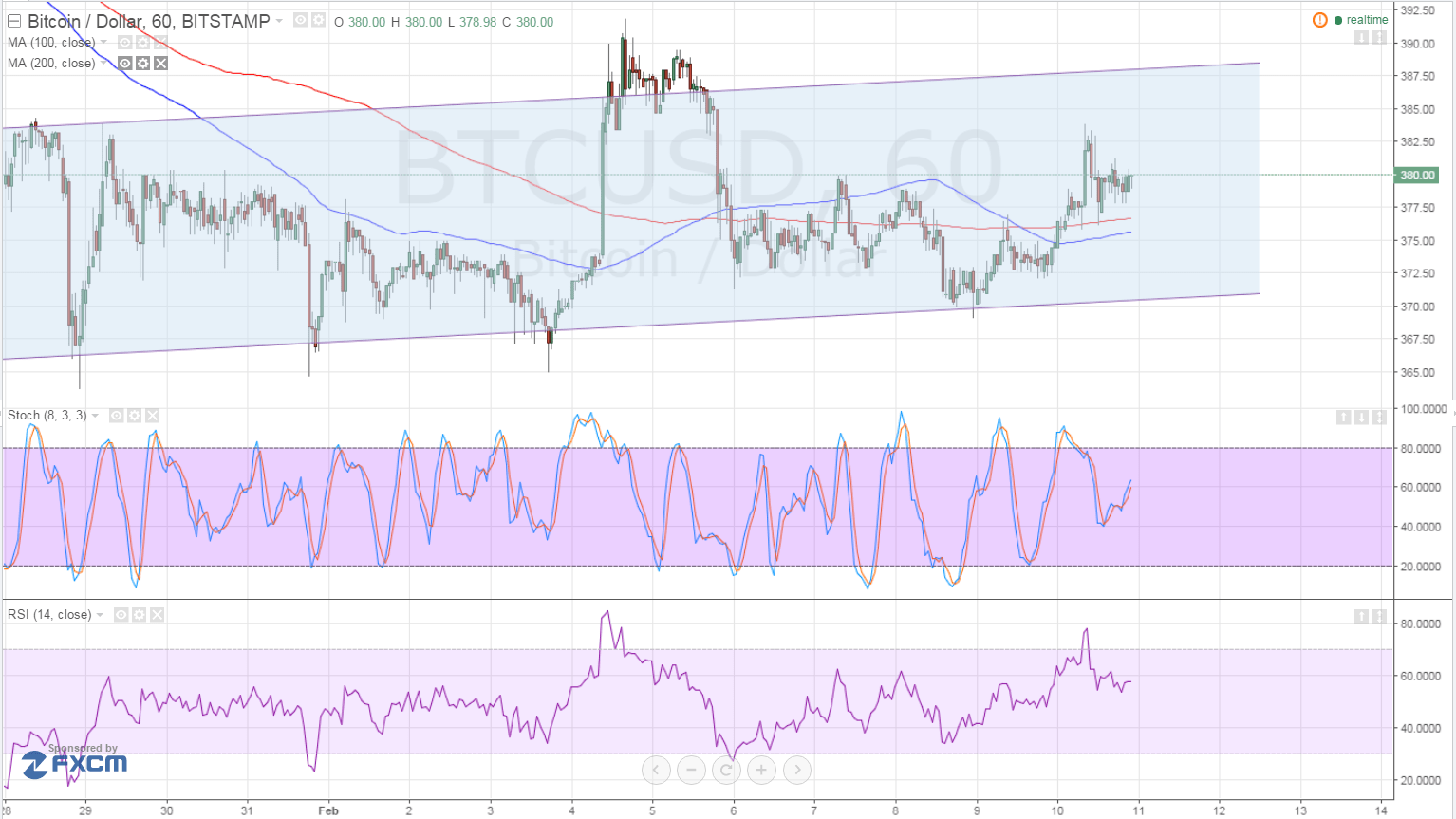 Bitcoin price could turn upon hitting the resistance at the top of the rising channel, possibly making its way towards support again.

The 100 SMA is below the 200 SMA so the path of least resistance might be to the downside, signaling that the mid-channel area of interest could still keep gains in check. If so, bitcoin price could drop back to the channel support around $370-372.

Stochastic is on the way up so there may be some buying pressure left enough to trigger a test of the resistance. On the other hand, RSI is moving down from the overbought levels so sellers might be taking control.

An upward crossover from the moving averages appears to be brewing, although these indicators are still oscillating and suggesting a continuation of the range-bound action. A break outside the current consolidation pattern at $380 could signal where bitcoin price is headed next.

Fed Chairperson Yellen delivered her much-awaited speech yesterday, triggering a quick dollar rally followed by a sharp reversal. She pointed out that the recent equity slump could weigh on economic growth and that Fed officials will continue to pay close attention to market developments to see if any adjustments to their tightening path should be made.

Negative interest rates might not be on the table yet, as Yellen noted that she’s not sure if this will be legal for the Fed to implement. For today, another testimony by Yellen and the US initial jobless claims report is due.

Risk aversion appears to be in play, although the dollar hasn’t been able to benefit much recently due to the event risks. If this market environment lasts throughout the week, bitcoin price might stand to lose some ground.

Bitcoin price is still stuck in consolidation on its longer-term time frames, although it is approaching the peak of the triangle patterns visible on the daily and 4-hour charts so a breakout might take place sooner or later.

This could hinge mostly on market sentiment and dollar price action, with bitcoin usually gaining ground when traders are hungry for more risk. On the other hand, continued risk-off moves could spur a prolonged selloff.

Later on in the week, US retail sales data is due and strong figures could renew dollar demand. The headline figure is slated to post a 0.1% uptick while the core figure could stay flat. Also due then is the preliminary UoM consumer sentiment index, which is a leading indicator of consumer spending.

Be mindful of potential weekend gaps as traders might book profits before Chinese traders return to the markets next week after their Lunar New Year holidays.