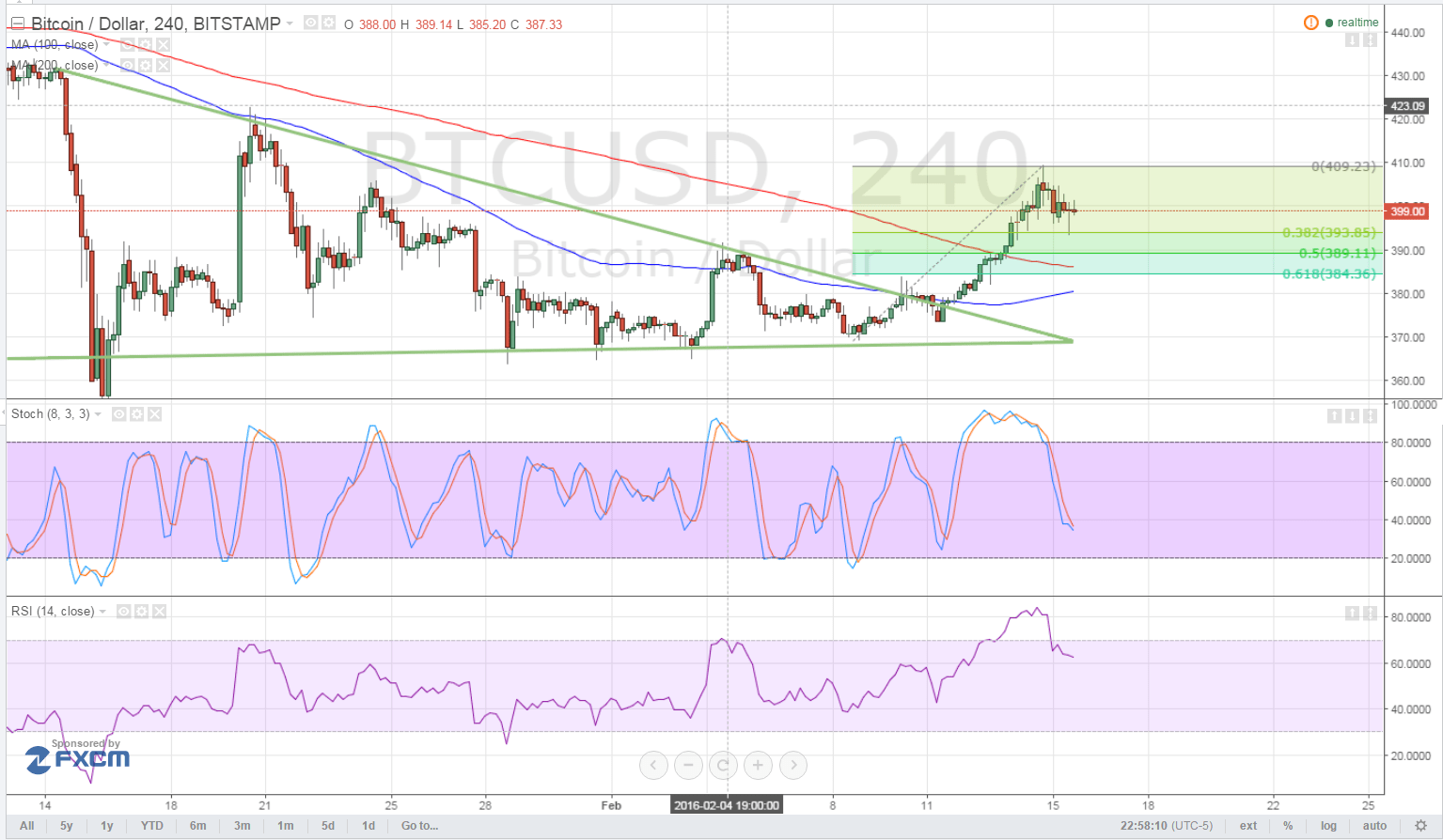 Bitcoin price has shown strong bullish momentum with its triangle breakout but buyers might be waiting to enter at better levels on a pullback.

The 38.2% Fibonacci retracement level appears to have held as near-term support with that quick bounce, but a larger correction to the lower Fib levels is still a possibility. The 50% level is around $390, which is also a psychological support area while the 61.8% Fib is close to the dynamic inflection points at the moving averages.

An even larger pullback could last until the broken triangle resistance near $370 and just slightly below the 100 SMA. This short-term moving average is below the longer-term 200 SMA for now, suggesting that there’s more downside, but an upward crossover seems to be brewing.

If that crossover takes place soon, more buyers could join the fold in anticipation of sustained gains for bitcoin price.

Stochastic is still on the move down so sellers are still on top of their game until the oscillator reaches the oversold region and turns higher. RSI has a much longer way to go before reaching oversold levels so a larger correction is indeed possible.

The return of Chinese investors from their Spring Festival holiday and the absence of majority of US traders during yesterday’s President’s Day holiday combined forces to weigh on the safe-haven dollar. Risk appetite was in play in recent trading sessions, spurred mostly by hopes that the meeting between Russia and some OPEC member nations could boost crude oil prices.

Russia will be talking to the leaders of Saudi Arabia, Venezuela, and Qatar today to try to come up with a proposal to trim production levels, thereby keeping a lid on the recent price declines. Any indication that a deal might be reached soon could lead to another risk rally, lifting bitcoin price in the process.

Only the Empire State manufacturing index is due from the US economy today and an improvement is eyed, likely leading to some gains for the US dollar if the actual readings beat expectations. On the other hand, bleak results could allow the bitcoin price uptrend to resume right away, probably pushing it past the previous highs around $409.

Stronger bullish momentum could even lead to a rally up to the triangle resistance at $430 and to the top of the longer-term symmetrical triangle formation near $450-460. Levels to watch right now are $375 and $385 for a potential correction bounce and the previous high at $409 for a possible break higher and a continuation of the bullish run.