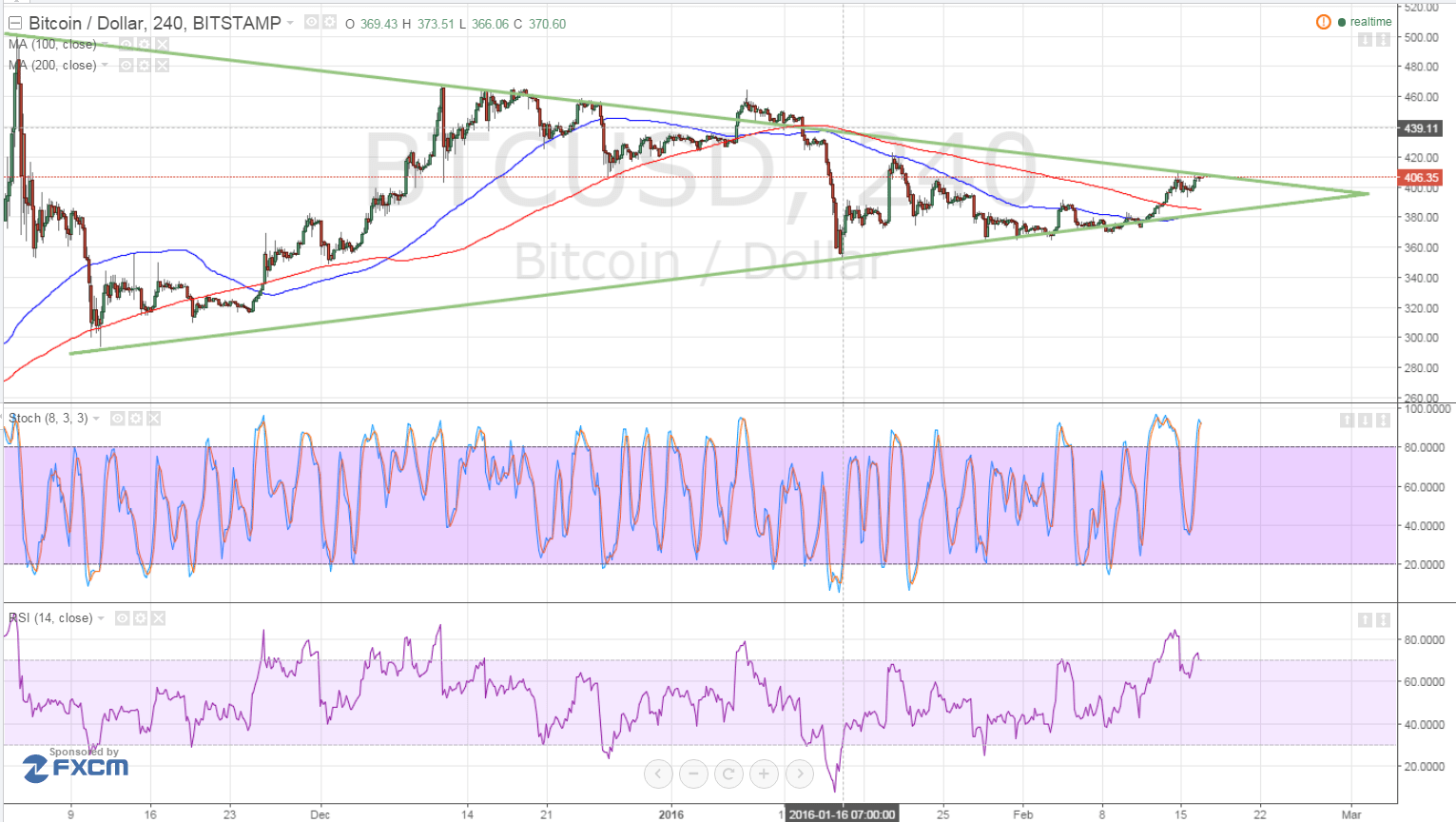 Bitcoin price is stalling right on the symmetrical triangle resistance, still deciding whether to make a bounce or a break.

The 100 SMA is below the 200 SMA on the 4-hour time frame, indicating that the path of least resistance is to the downside. This means that the triangle resistance is likely to keep gains in check, forcing bitcoin price to turn back south and make a test of the support at $380.

Stochastic is indicating overbought conditions, although the oscillator hasn’t turned down from the 80.0 level yet. RSI, on the other hand, is already on the move down so bearish momentum might be picking up.

If sellers are strong enough, they could even push for a break of the triangle support and spur a longer-term drop for bitcoin price. This could lead to a downtrend until the very bottom of the triangle at $280-300.

On the other hand, a strong surge in bullish pressure could trigger an upside break of resistance, leading to a rally up to the peak of the triangle at $500, which is the previous year high.

Yesterday’s run in risk appetite allowed bitcoin price to sustain its climb, as US traders returned to their desks and pushed equities higher. Also, data from the US economy came in short of expectations, weighing on demand for the Greenback and lifting bitcoin in the process.

For today, the US economy is set to print its PPI, building permits, and industrial production reports. Another round of weak results could mean more losses for the dollar, allowing bitcoin price to make an upside breakout from the symmetrical triangle resistance.

However, traders might hold out for the release of the FOMC minutes, as these might contain a downbeat outlook for the economy. Fed officials have recently expressed their concerns about falling commodity prices, dollar strength, and financial market volatility – all of which might dampen risk appetite and keep a lid on bitcoin price gains.

Commodity prices have also played a factor in bitcoin price trends, as the cryptocurrency appears to be gaining ground in tandem with crude oil. Just recently, a few meetings were held among energy officials of Russia, Venezuela, Qatar, and Saudi Arabia but these simply led to proposals of a production freeze instead of an actual cut.

Also, the agreements aren’t set in stone yet since Saudi Arabia has agreed to cooperate only if other oil-producing nations join in. So far, Iran still appears intent on ramping up production now that they’ve just returned to the oil export market, thereby weighing on commodity prices and market sentiment.