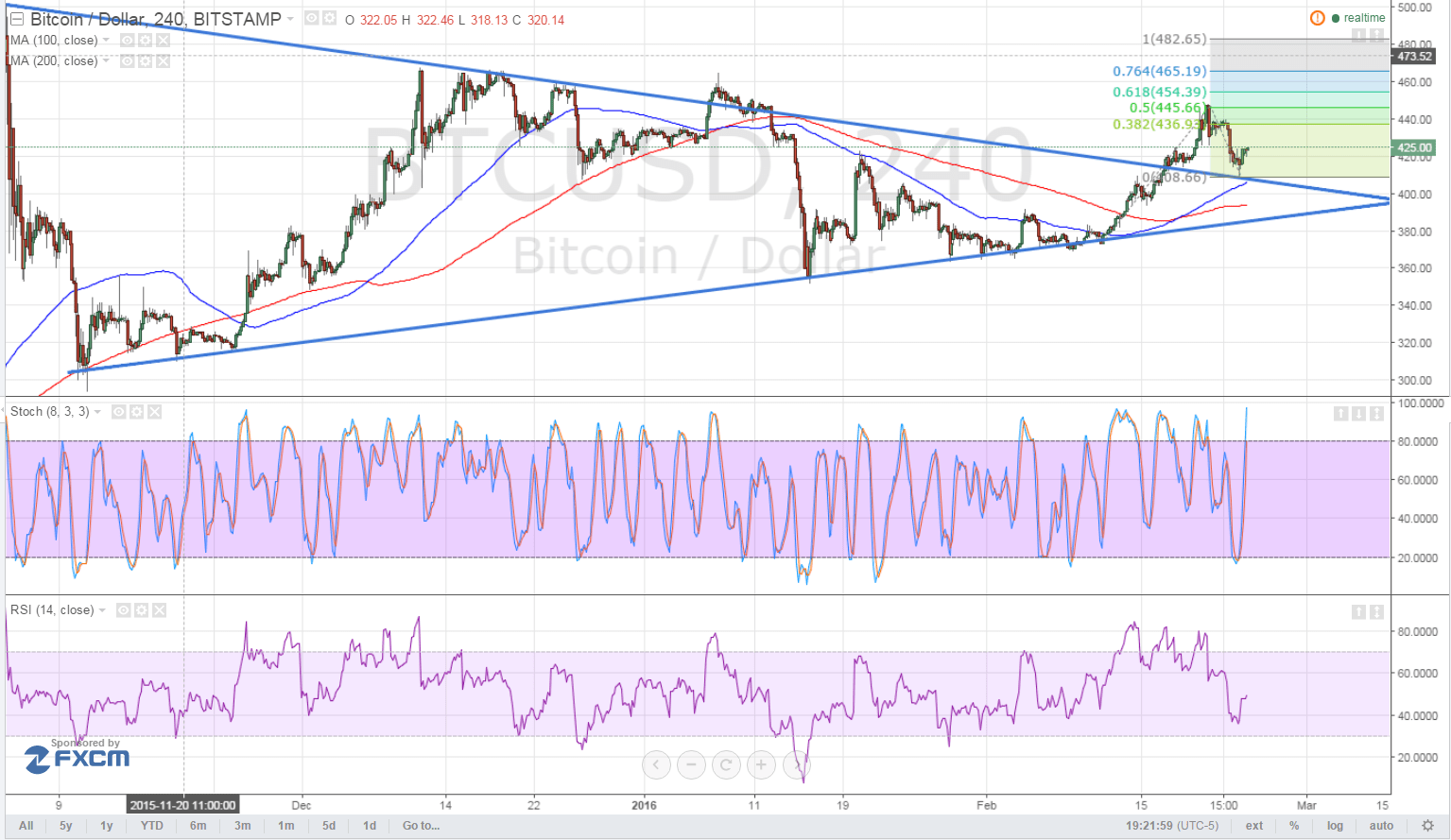 Bitcoin price could be aiming for its previous high or more gains beyond that, as the area of interest held as support.

The next potential resistance or 50% level is around the swing high of $445, followed by the 61.8% Fib at $454 then at the 76.4% extension at $465, which lines up with the highs earlier this year. Further gains past that point could lead a move all the way up to the full extension around $482 then possibly to last year’s highs closer to $500.

The 100 SMA recently crossed above the longer-term 200 SMA to confirm that an uptrend is taking hold. A larger correction, should it take place, could still draw support from the 100 SMA which is near the broken triangle resistance. The 200 SMA is right around the bottom of the triangle or $400, which might be the line in the sand in case another pullback happens.

Meanwhile, stochastic is pointing sharply up, reflecting a strong surge in bullish momentum. RSI has been on the way down but turned higher even before hitting the oversold regions, also indicating that buyers are taking the upper hand.

The strong crude oil price bounce spurred by the latest US inventories report was mostly responsible for the pickup in risk-taking late in the New York trading session. Stockpiles rose 3.1 million barrels versus the estimated gain of 2 million barrels but was still lower than the API estimate of 7.1 million barrels reported the previous day.

Weak US data also contributed to the dollar’s slide against bitcoin price, as the flash services PMI slipped into contraction. In addition, new home sales came in below expectations, down from 544K to 494K versus the projected dip to 522K.

Up ahead, US durable goods orders data is due, along with the initial jobless claims report. Another round of weak results could trigger more losses for the US dollar against bitcoin price, probably as traders price in much lower odds of a Fed rate hike in March.

Meanwhile, increasing demand for alternative currencies in Venezuela is driving up bitcoin price as well. This phenomenon has been observed during the Greek debt crisis and capital controls last year, allowing bitcoin startups to thrive and offer new services to the cash-strapped nation. Also, Japan’s move to regulate bitcoin as a regular currency is adding to its legitimacy, thereby keeping prices supported.