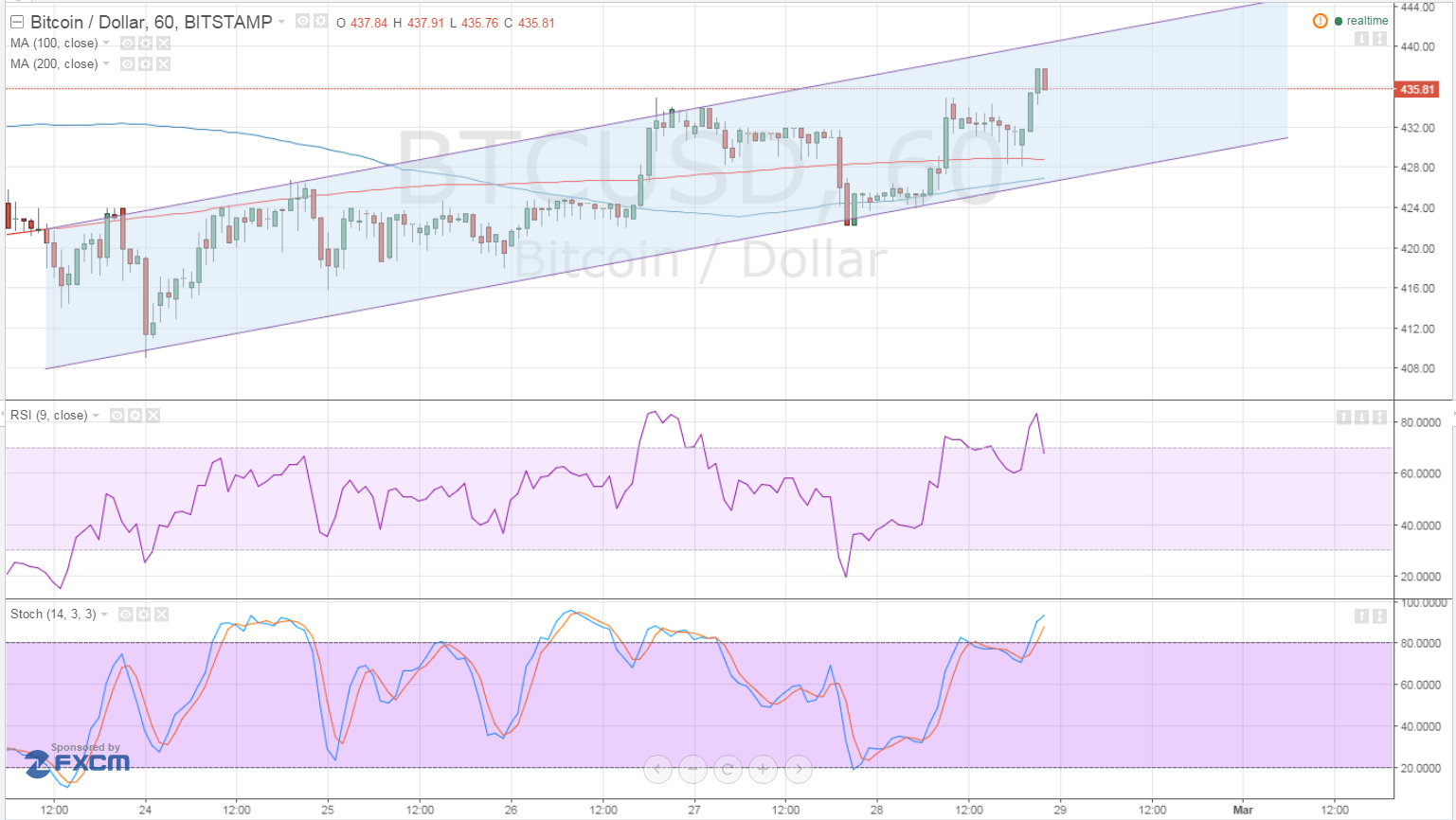 Bitcoin price is gradually trading higher inside an ascending channel and might be due to test the resistance near $445.

Will the Channel Hold?

Technical indicators suggest that bitcoin price might bounce off the top of the range, as RSI is starting to turn down from the overbought zone. Stochastic still seems to be on the move up but has just landed in overbought territory, indicating that buying pressure might fade soon.

In addition, the 100 SMA is below the 200 SMA, suggesting that the path of least resistance is to the downside. However, an upward crossover appears to be brewing, which could mean that the uptrend might still carry on.

A bounce off the channel resistance at $445 could lead to a test of the channel support at $425, which is right around the dynamic support of the moving averages. Buyers might be waiting to enter around these levels, allowing the uptrend to gain stronger momentum.

A strong dollar rally, however, might lead to a break of the channel support and a corresponding downtrend if risk aversion returns.

Keep in mind that bitcoin previously broke below a short-term rising trend line, which suggests that buyers are having trouble sustaining the strong climb. A weak rally might take place from here, as bitcoin price is still safely above the broken triangle resistance around $420.

Data from the US economy came in stronger than expected on Friday, allowing the dollar to regain ground against its currency counterparts. Still, bitcoin price was able to stay afloat as risk-taking remained present in the financial markets.

The US GDP was upgraded from 0.7% to 1.0% instead of being downgraded to the projected 0.4% figure. Also, personal spending and income beat expectations with 0.5% gains each. For today, Chicago PMI and pending home sales data are due.

More catalysts are lined up throughout the week, including the ISM PMI releases and ADP non-farm employment change data ahead of Friday’s NFP. Strong jobs data could renew calls for a March rate hike from the Fed, even though policymakers have specified that they’re waiting for more inflation gains.

Other event risks for the week include the release of Chinese PMI readings tomorrow, as this could have a strong influence on overall market sentiment. Analysts are expecting to see the Caixin manufacturing PMI to hold steady at 48.4 and the official government reading to stay at 49.4, although any major revisions could determine where risk flows might be headed.

Apart from those, the RBA statement could also lead to strong moves, as a shift to a more dovish stance could lead investors to move more funds to safe-havens like the dollar.