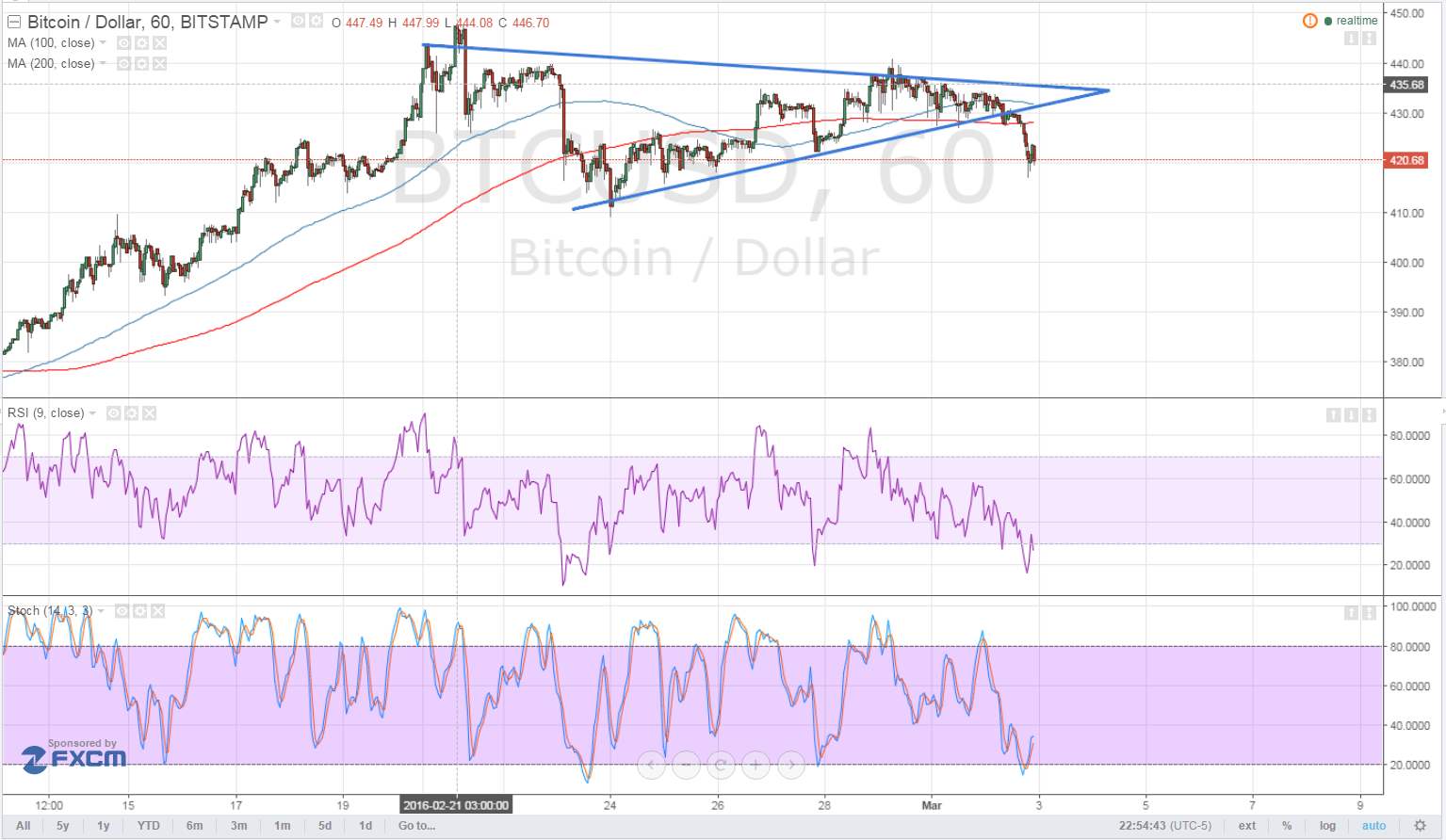 Bitcoin price could be due for more declines after making a downside break of consolidation and forming a reversal pattern.

Technical indicators are suggesting a potential bounce for now, with the 100 SMA above the 200 SMA and oscillators moving out of the oversold levels. Both RSI and stochastic are also showing slight bullish divergences, hinting that buyers could come back in the game and trigger a pullback or rally for bitcoin price.

A pullback could lead to a test of the broken triangle support near $430 and the moving averages, which might hold as dynamic inflection points. A larger rally could lead to a move up to the tops around $440-450 or the previous year highs at $500.

Meanwhile, a continued selloff could lead to a drop to the next support around $380-400 and all the way down to $300. The triangle is approximately $50 tall so the resulting drop could last by the same amount.

Data from the US has been stronger than expected yesterday, as the ADP non-farm employment change report hinted of a potential upside surprise in the NFP report. The ADP reading showed a 214K gain in hiring versus the projected 185K increase, although the previous report showed a downgrade.

Still, risk appetite was present in the financial markets yesterday, lifting most of the commodity currencies despite the buildup in oil supply. For today, the ISM non-manufacturing PMI is due and another strong reading could mean more dollar gains, as investors price in higher odds of a Fed rate hike this month or in the next few months.

In addition, the Fed Beige Book has been mostly upbeat, with most districts reporting improvements in economic activity. Labor improvements were also noted, although wage growth has been flat to gaining in some districts.

As discussed in an earlier update, bitcoin price is still stuck in a longer-term symmetrical triangle after bouncing off the resistance. Price could now be aiming for the bottom of the pattern from here. Technical indicators are also giving mixed signals from this time frame.

Oscillators on the daily time frame are pointing lower, still indicating that sellers are in control of bitcoin price action. However, the 100 SMA is above the longer-term 200 SMA so a bounce off the triangle support near $380 could take place.

Varying market themes have been driving price action these days, as correlations between bitcoin and higher-yielding assets appear to have broken down. With that, headlines on the bitcoin industry could be more influential in terms of price action for the coming weeks, as traders wait for stronger catalysts.