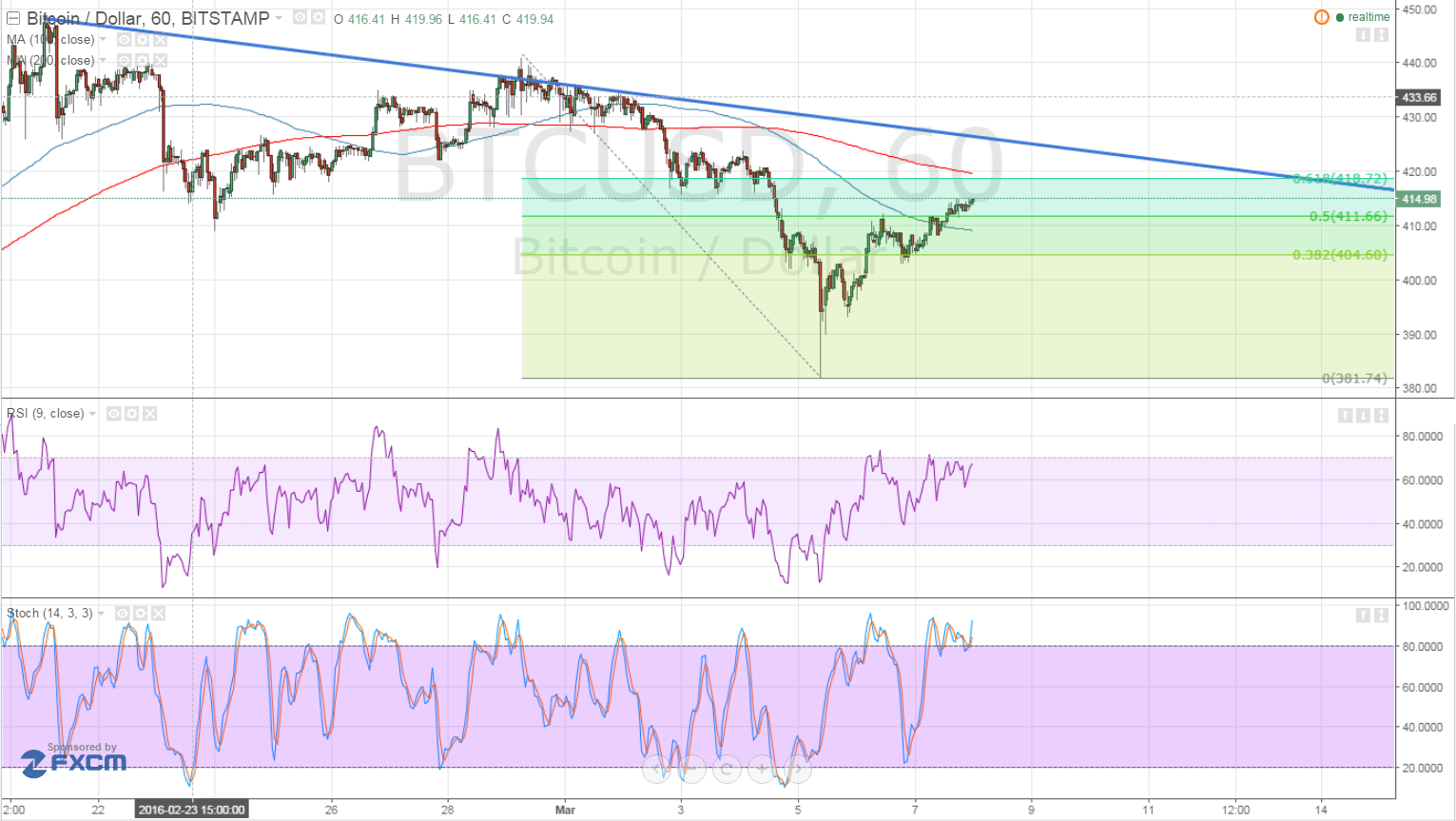 Bitcoin price could be due for another steady drop if the trend line and Fibonacci retracement levels hold as resistance.

In addition, the 200 SMA could hold as a dynamic inflection point, keeping gains in check and allowing the selloff to resume as this lines up with an area of interest or former short-term support zone.

Also, the 100 SMA is safely below the longer-term 200 SMA and is increasing the distance, reflecting the presence of and buildup in bearish pressure. RSI is still pointing up but is nearing the overbought level so buyers are feeling tired while stochastic is indicating overbought conditions but has yet to turn lower.

Stronger than expected jobs data triggered a downside break of the $420 support for bitcoin price and a test of the $380 lows but profit-taking swiftly took place. Trader might be easing up on their dollar positions ahead of the central bank events this week, particularly that of the ECB.

The European Central Bank is widely expected to ramp up their easing efforts this month in order to boost inflation. Their previous expansion turned out to be a disappointing one and spurred risk-on flows, but they might go all out this time and spur massive risk-off moves across the markets.

As for the US dollar, FOMC officials’ speeches did little to support the currency against bitcoin price yesterday, as investors doubt that the Fed can be able to hike interest rates this month. At best, the Fed could give a relatively upbeat statement and acknowledge the pickup in inflation while still maintaining their plan to tighten later this year.

Earlier today, China reported a much weaker than expected trade balance, weighed down by double-digit declines in both imports and exports. This might keep traders from taking on more risk, as speculations on a global economic slowdown might weigh on higher-yielding and riskier assets like bitcoin.

There are no other major economic reports lined up for the rest of the day, leaving market sentiment in charge of bitcoin price action. Positioning ahead of central bank events could keep consolidation in play if investors hesitate to increase their exposure to these catalysts.

Tags: bitcoin pricebtcusdbtcusd signals
TweetShare
BitStarz Player Lands $2,459,124 Record Win! Could you be next big winner? Win up to $1,000,000 in One Spin at CryptoSlots