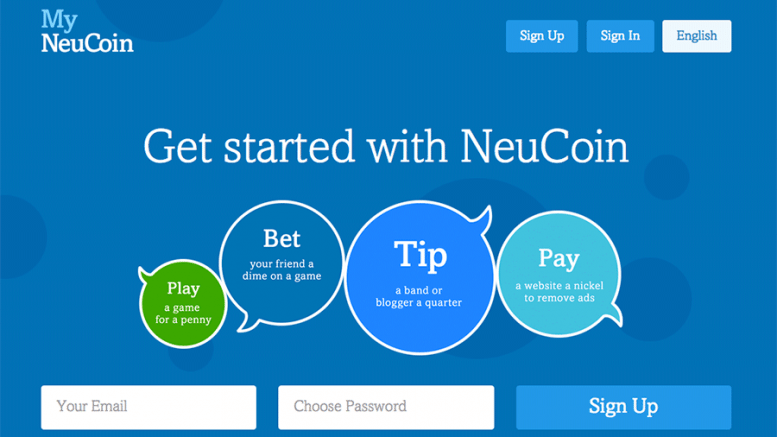 NeuCoin, the Peercoin based decentralized currency has been breaking new barriers in constant intervals. The platform recently made new announcements which are going to make the platform even better.

Given the nature of the announcements, the market has also appreciated these changes by responding in a positive way as expected. NeuCoin has become one of the best performing cryptocurrencies in the recent months.

Since the launch of its consumer applications about 3 months ago, the number of new NeuCoin users has reached the 275000 mark with close to 8000 new users joining the platform each day. The scale of expansion of NeuCoin community will help the platform reach the 2 million mark by the end of this year quite easily. Applications on various platforms using NeuCoin has led to an increase in its adoption even among those who were never into cryptocurrency before these applications came about.

The inclusion of NeuCoin as one of the tipping option on Jango Internet Radio made it even more popular. According to few statistics made available by the cryptocurrency platform, Jango alone has got over 30000 users who have made use of the digital currency to tip artists on the platform. The cryptocurrency’s track record on Jango sends a clear message to the cryptocurrency platform about the importance of strategic partnerships and how they can get a great deal out of it. NeuCoin is confident that Jango alone can provide them with the forecasted 2 million users by the end of 2016.

The second part of its announcement included the company’s plans to optimize the supply of digital currency in such a way that it will help create a more stable ecosystem. In order to increase the value of NeuCoin, the platform will be cutting the total supply of crypto tokens by half.

Bitcoin and other altcoins that came before NeuCoin have clearly exhibited that the demand is one of the factors that influence the cryptocurrency’s value. Whenever there is an increased demand for bitcoin in exchanges, the bitcoin value starts exhibiting an upward trend. The rationale behind reducing the number of total available NeuCoins by half follows the same rationale.

NeuCoin intends to implement the reduction of NeuCoin by reducing the NeuCoin foundations holdings from over 3B to 1B. The coins thus removed will be destroyed, driving the demand up by reducing its supply.

These new developments have caused a significant deviation from the previous forecasts for the digital currency. According to the new forecasts, taking the change in demand and the number of coins into consideration, the total distribution of NeuCoin is now expected to finish by the end of three years instead of 10. Also, the contribution from mining is now forecasted at 10B instead of previously stated 100B.

All these changes are a result of introspection and customer feedback. Apart from learning by experience, NeuCoin has listened to feedback from its users and other industry pioneers to make some changes for good. The recent announcements are a result of two main concerns raised by the community. The concerns regarding the growth potential and coin supply along with concerns about the possession of a significant amount of NeuCoins by the foundations were shared by the team, leading to these new changes.

So far, NeuCoin has been able to put the concerns and doubts expressed by cryptocurrency community in its initial days to rest by showing high growth in a very short time. Their performance so far makes us believe that the platform will soon be announcing some new features in the coming months.

Tags: bitcoincryptocurrencyjangoneucoinNews
TweetShare
BitStarz Player Lands $2,459,124 Record Win! Could you be next big winner? Win up to $1,000,000 in One Spin at CryptoSlots