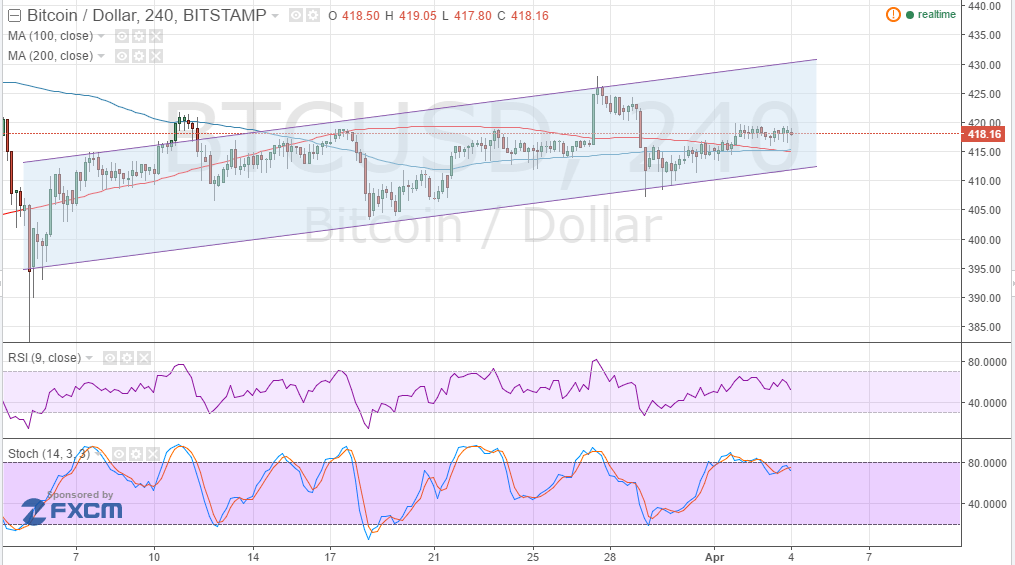 Bitcoin price is slowly crawling higher with the rising channel still intact, but a downside break and reversal might be looming.

The 100 SMA is below the 200 SMA for now so the path of least resistance might be to the downside. However, an upward crossover appears to be taking place to show a pickup in bullish strength. If so, bitcoin price could make a stronger attempt to rally towards the channel resistance.

Stochastic is making its way down from the overbought level to show a return in bearish pressure. RSI is also heading south so bitcoin price might follow suit. In that case, price could attempt a break below the channel support around $410-415 and go for more losses until the channel lows at $380.

Data from the US economy came in stronger than expected on Friday but this didn’t appear to usher in prolonged dollar gains. The US economy added 215K jobs in March, higher than the estimated 206K gain, while average hourly earnings showed stronger wage growth of 0.3% versus the 0.2% consensus.

For this week, the FOMC minutes are up for release and this should shed more light on Fed officials’ biases and expectations for the US economy. In their recent testimonies, the outlook has been somewhat positive but Fed Chairperson Yellen’s assessment leaned more towards the downbeat side.

With that, dollar demand remains bleak, allowing bitcoin price to take advantage and stay within its uptrend channel.