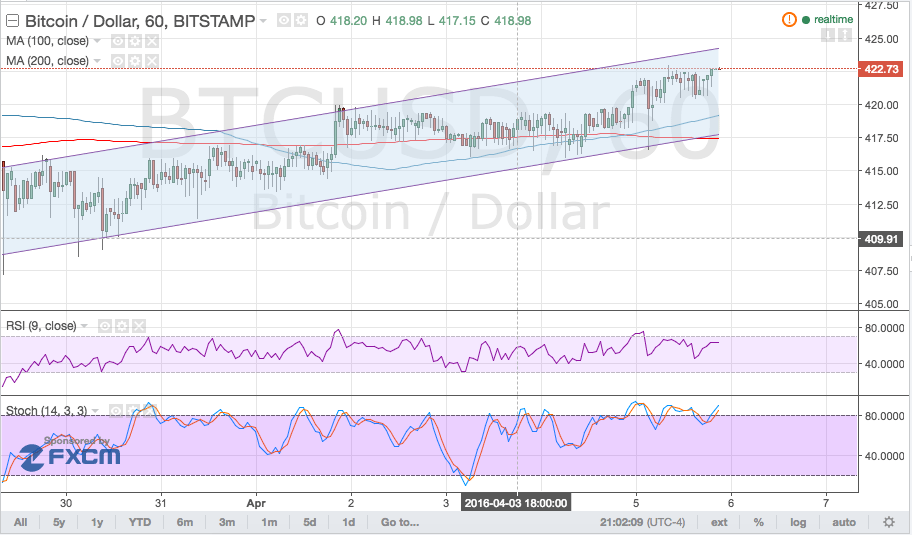 Bitcoin price might encounter near-term resistance at the top of the rising channel but the overall uptrend remains intact.

The 100 SMA is above the 200 SMA so the path of least resistance is to the upside. If bullish pressure is strong enough, bitcoin price could even go for an upside break of the channel resistance, spurring a stronger rally for the virtual currency.

RSI is treading sideways, indicating that consolidation could carry on and that buyers and sellers are still undecided. However, stochastic is already indicating overbought conditions so a selloff might take place sooner or later.

If bearish pressure is strong enough, bitcoin price could push for a break below the channel support and the dynamic inflection points around the moving averages. In that case, price could start a stronger selloff to the longer-term channel support on the 4-hour chart.

The FOMC minutes are up for release today, which explains why traders are letting go of some of their dollar positions, putting a bit of upward pressure on bitcoin price. Testimonies from Fed officials have given mixed messages, with some showing optimism and Fed Chairperson Yellen reiterating that extra caution must be practiced in considering additional tightening measures.

Data from the US economy was mostly stronger than expected while commodity prices rebounded during the New York session, allowing a bit of risk appetite to come in play. However, it remains to be seen how FOMC policymakers interpret the latest numbers and what these imply for their future policy decisions.