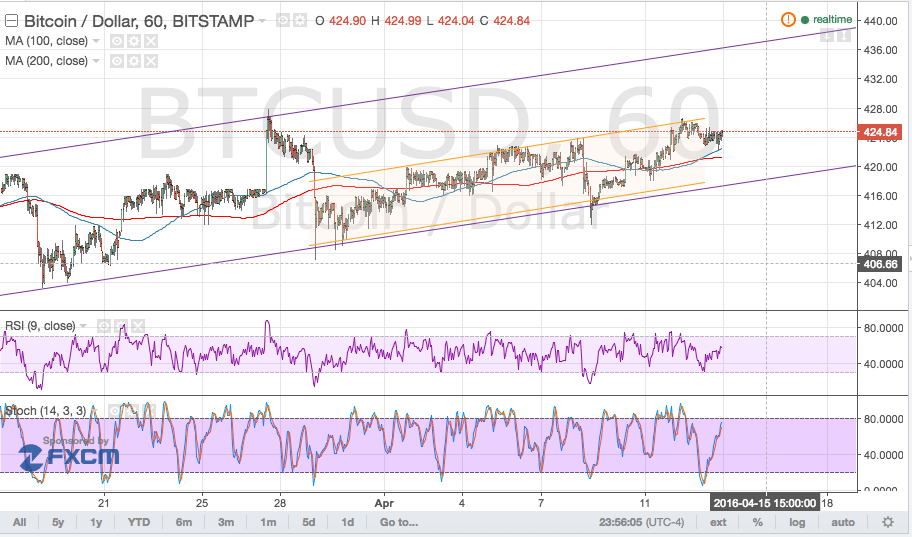 Bitcoin price has encountered resistance at the mid-channel area of interest, paving the way for another potential test of support.

The 100 SMA made another crossover above the 200 SMA, suggesting that the path of least resistance is to the upside. This indicates that a potential upward breakout from the near-term channel top at $430 could be seen. In that case, bitcoin price could be on track towards testing the larger channel resistance at $435-440.

Meanwhile, RSI is pointing up to show a return in bullish pressure, also hinting that further gains could be seen. Stochastic is also on the move north, which suggests that bitcoin price might follow suit.

Data from the US economy came in weaker than expected yesterday. But instead of reinforcing dollar weakness, this actually led to rallies for the safe-haven currency, as market watchers worried that global growth could see a worse than expected slowdown.

Headline and core retail sales, as well as headline and core PPI, fell short of market expectations, setting the stage for weaker than expected CPI releases today. If so, the dollar could advance against bitcoin price again on risk-off moves. On the other hand, stronger than expected results could bring risk appetite back to the table and trigger an upside breakout from the short-term channel resistance.

Other market catalysts today include the Bank of England monetary policy decision, along with earnings releases from top US companies. So far results have been mixed and equity markets have taken this positively.