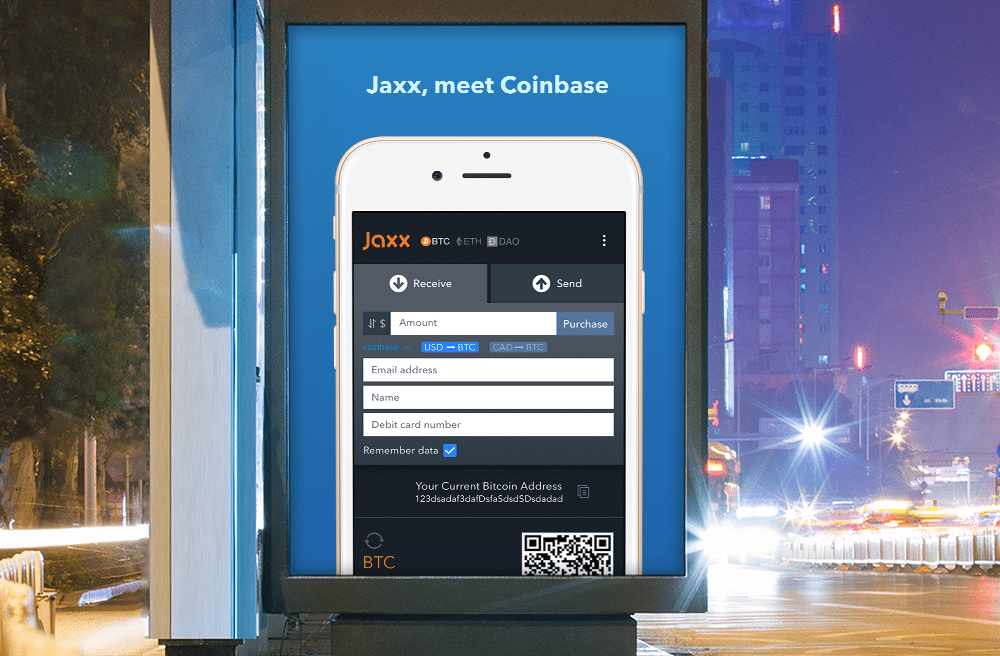 Decentral released yesterday an initial concept design to integrate Jaxx with Coinbase’s “Buy Widget“, a small piece of software that is easily embeddable into existing websites and programs. This feature will use Coinbase’s platform to allow users to instantly purchase and receive small quantities of Bitcoin using debit cards into their Jaxx Bitcoin-Ethereum wallet

The company stated the reasoning behind this new feature:

In recognition of the fact that the space requires new, faster and more convenient ways for users to purchase cryptocurrency with cash, we’re excited to give the community a sneak peek at our planned integration of Coinbase’s “Buy Widget” directly within Jaxx.

Initially, this new feature will only be available to users based in the United States. Decentral is currently investigating purchase options for users in other parts of the world.

Jaxx and Buy Widget Will Grow

Coinbase is working with several developers and companies to deliver the Buy Widget to a variety of novel Bitcoin services. The unveiled services and products that will use the new Coinbase feature are Brave, a web browser which automatically blocks ads and trackers to deliver a fast browsing experience.

Brave is also building a new ad network that will reward its users with 15% of all revenue. Videogame Hammercoin and micropayments platform for video PopChest will also include the widget.

Decentral, the Canadian Blockchain company, has been very busy in recent times, the company has released many updates to their existing products and services, along with the announcement of new ones.

The company started an event titled “Many Days of Jaxx” during which they unveiled an update of their flagship Ethereum/Bitcoin wallet Jaxx (which is available on all desktop and mobile platforms, including iOS). Day 2 of the event came with a rollout plan of deployment of Jaxx Coin Cards which will bring physical prepaid bitcoins cards to a network of Kiosks all across Canada.

Other relevant announcements include the future plans to release a multi-currency hardware wallet, and a framework to review, vote and create The DAO proposals.

Tags: bitcoinBitcoin NewsBravebuy bitcoincoinbaseDebit CardsGamesHammercoinJaxxNewsProductsSoftware
TweetShare
BitStarz Player Lands $2,459,124 Record Win! Could you be next big winner? Win up to $1,000,000 in One Spin at CryptoSlots