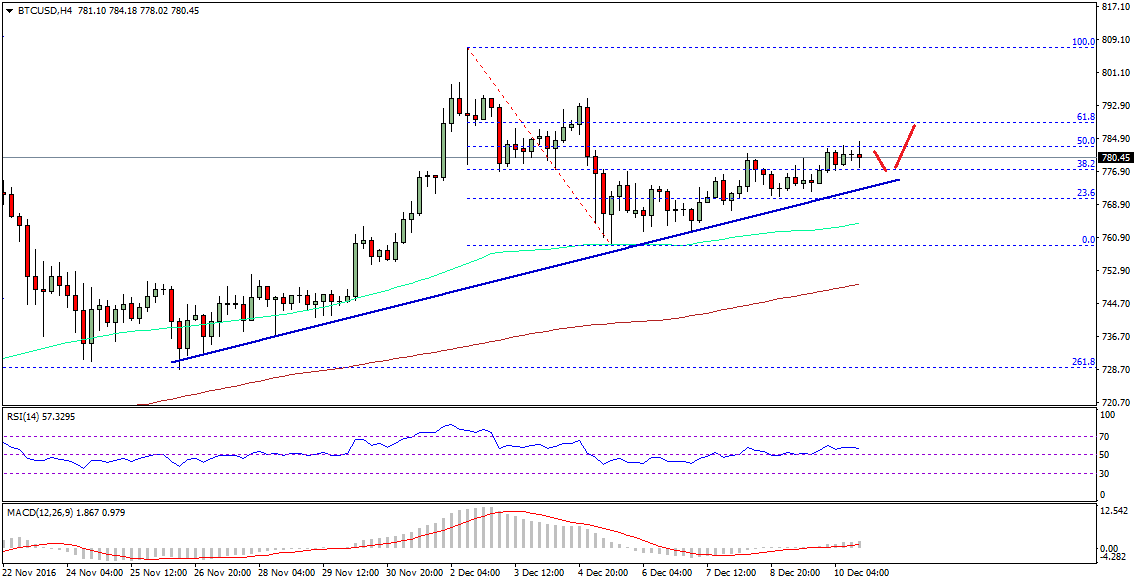 Bitcoin price is currently in an uptrend against the US Dollar, and it looks like the BTC/USD pair may continue to trade higher in the near term.

There was a nice bullish trend initiated in Bitcoin price against the US Dollar from the $720-00 support area. The data feed of SimpleFX suggests that the price traded above $800 once before starting correcting lower. There was a downside move, taking the price towards the 100 simple moving average (4-hours chart) at $760. Later, an upside move in BTC/USD was initiated once again, and the pair moved above the 23.6% Fib retracement level of the drop from the $806 high to $760 low.

The current upside move is supported by an important bullish trend line formed on the 4-hours chart (data feed from SimpleFX) of BTC/USD. The trend line is constantly providing support to the pair, and acting as a pivot area. As long as the pair is above it, there is a possibility of a run towards $800 one more time. On the upside, an initial resistance is around the 61.8% Fib retracement level of the drop from the $806 high to $760 low at $788. In short, the current trend is bullish that may continue to push BTC/USD higher.

4-hours MACD – The MACD is currently in the bullish zone, but with less momentum.

4-hours RSI (Relative Strength Index) – The RSI is currently above the 50 level, which is a bullish sign.