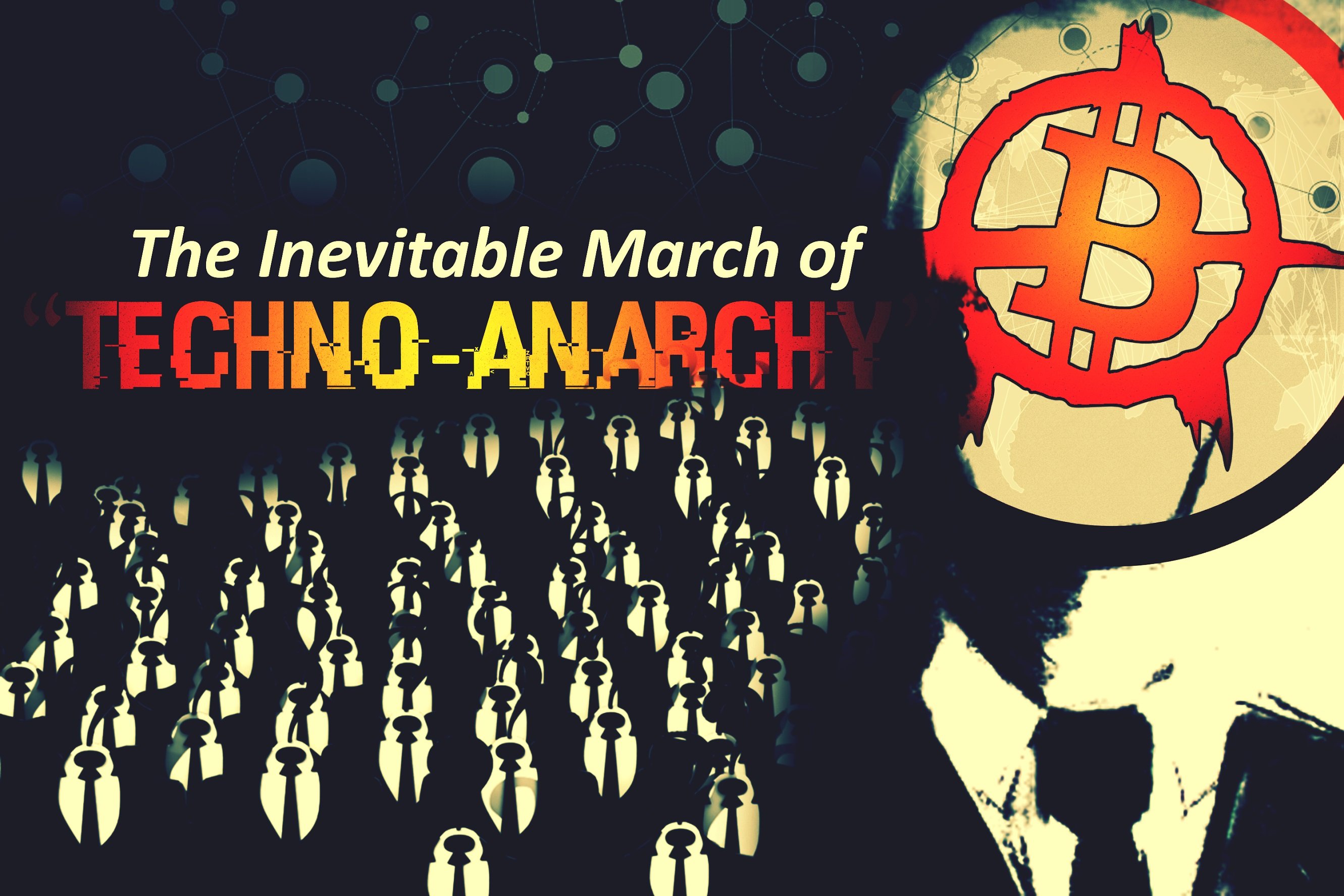 The Inevitable March of Techno-Anarchy

Next Article: Bitcoin Price Watch; Return To The Upside?

Techno-anarchism has existed for a long time, popularly imagined in books and movies in various (often unrealistic) forms. Traditionally more of a political practice than a belief, it is focused on utilizing technology to advance freedom, occasionally by active means such as hacktivism, but usually via peaceful methods such as Bitcoin.

Guiding many of its practitioners, however, is a general theory about the innate nature of technology itself. While other anarchists are concerned about the degree to which technology is controlling our lives, these techno-anarchists understand that technology not only can promote freedom, but that it tends to do so. It is a powerful force in our society, and the effects can clearly be seen throughout history.

Initially, technology had the opposite effect. The discovery of agriculture caused hunter-gatherers to organize into permanent settlements, and as populations grew (beyond what’s known as Dunbar’s Number), formal rules became required to manage them. Further technological advances saw these villages develop into city-states, then nations, and eventually empires as the world grew gradually smaller.

Technology would inevitably turn against the tyrants, however. As noted by many prominent political scientists such as Fareed Zakaria, a successful dictatorship is its own undoing. As standards of living improve and the population grows more educated, they will become both more capable and more desirous of autonomy, as well as supportive of individual liberty. South Korea, once ruled by a military junta, is a perfect example of how this can lead to a successful democratic transition that respects human rights.

Unfortunately, democracy has many limitations. The representative structure we’re familiar with (as opposed to direct voting by everyone on all issues) was chosen not just due to distrust in the general public, but for simple logistical reasons: there was no way to get everybody in an entire country together in one room. Basically, insufficient transportation and communications technology created a legacy that still holds on, today.

Technological setbacks have hampered the free market, as well. Key infrastructure networks such as the power grid, roads, and Internet are centrally controlled and monopolized—either by the state or a corporate conglomerate—because there was no alternative. Laying multiple competing lines in a city block would be a messy nightmare, whereas it is trivially easy to display numerous competing products at a retail store.

Those are problems techno-anarchists have thankfully been working to solve. Why ship by road or rail when you can send goods by delivery drone, instead? We’ll still have to agree on traffic laws, but we’ll be vastly less reliant on the government to maintain crucial infrastructure. The advance of 3D printing will only accelerate this phenomenon as more intricate consumer items become cheaply constructible at home.

The same trend can be seen in many other sectors of the economy. The energy industry is centralized because it has always been assumed that consumers cannot store or create their own supply. Soon, that won’t be the case, as new hyper-efficient solar panels allow people to generate electricity at home. Electricity produced during peak hours can be stored in home batteries like Tesla’s, and any excess can be sold back to the grid.

Even more exciting are advances in wireless technology, as the increasing range of wireless routers will gradually lead to the formation of a global meshnet. Currently, most people access the Internet through a router that connects to an ISP, which connects all of its customers via a central hub under its control. Once everyone’s routers are in range of each other, however, your ISP’s services become unnecessary.

Such networks cannot be controlled, and are already being used to promote free speech in oppressive parts of the world. Likewise, peer-to-peer networking is gradually reducing our reliance on central server hosts for the distribution of multimedia content and interacting with one another online. These networks are completely voluntary, devoid of coercion via governments or otherwise.

The real story of techno-anarchy, however, began with Bitcoin. Your bank would like you to believe a lot of things, but the real reason you need them is because you cannot fit your life savings under a mattress (hopefully). There also needs to be some way for new currency units to enter the economy and prevent counterfeiting, so we have to put up with a central banking system.

Or we used to, anyways. With Bitcoin, there is no limit to the amount of wealth you can store with a private key, which is easily kept on any digital device or even pencil and paper. You don’t need a credit or debit card network to send funds, because Bitcoin works peer-to-peer. New coins enter the world via Bitcoin miners, who use math to prevent counterfeiting, instead.

Now the blockchain—the technology underlying Bitcoin—is taking things beyond the financial system. Although it was traditionally just used to record everybody’s BTC balances, the blockchain can actually store all kinds of information, including property titles, equity, advanced financial instruments, and legal contracts that execute automatically.

That means central databases and registries of all kinds are no longer necessary, including those run by the government. In particular, we no longer need courts to interpret the law, nor a bureaucracy to help execute it. Citizens could vote on legislation directly with ease; those who want to live differently may eventually establish new societies in international water and even outer space. Others will form virtual nations like BitNation, hosting parallel services without respect to geographic boundaries.

In fact, there need not be any real government at all. Eventually, jurisdictions will emerge that operate in a state of pure techno-anarchy, obeying only the non-aggression principle (or some variation). This is the basic paradigm of the Internet of Things, wherein all interactions are completely voluntary and transparent. There is no reason humans cannot live the same way, and one day many will.

The Inevitable March of Techno-Anarchy was last modified: January 17th, 2017 by newsbtc