How Buying Real Estate With Bitcoin Netted a US$1.3m Profit 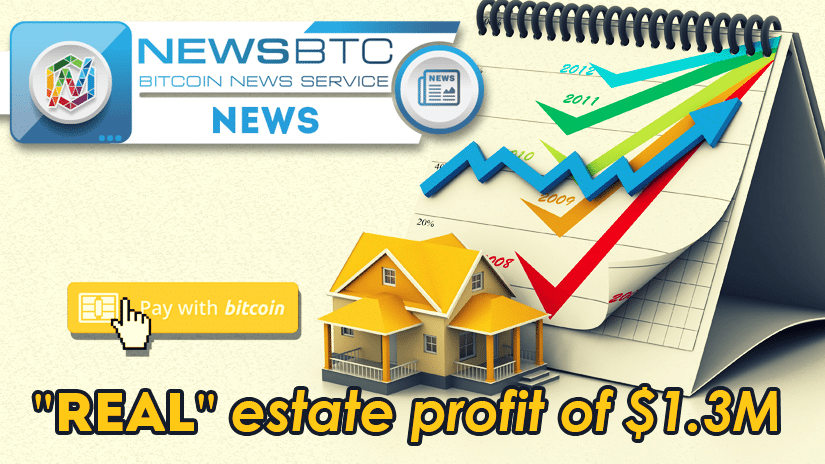 People who invested in Bitcoin at an opportune time now have a chance to reap some of the rewards. Although not every person buying Bitcoin has seen a successful return so far, things have definitely improved over the past 6 months. One Bitcoin user in California managed to buy a house with Bitcoin profits. In the end, this real estate transaction resulted in a US$1.3m profit. It goes to show it is never being too late to invest in Bitcoin.

There have been some correlations between Bitcoin and real estate in the past. Tenants involved in cryptocurrency would like nothing more than to pay their rent with Bitcoin. In some cases, people even buy a new property with Bitcoin, either directly or with the profits obtained from selling it. In most cases, users still have to convert Bitcoin to fiat currency, though, but that situation may come to change in the coming years.

Buying Real Estate With Bitcoin Can Be Profitable

One California man used his Bitcoin earnings to buy a property not too long ago. Although the real estate agent was not too sure about using Bitcoin for this purchase, both parties came to an agreement in the end. At that time, the property was valued at US$4m, which is quite a significant sum to pay in Bitcoin. Then again, with the help of BitPay, it became somewhat easier to settle the transaction in Bitcoin directly.

At the time of the transaction being initiated, one Bitcoin was worth around US$750. However, once the deal was completed, one BTC shot up to US$1,000. This allowed the buyer to spend far less Bitcoin than originally needed, resulting in a US$1.3m “profit”. Quite a significant amount while getting what you want, yet that is the power of Bitcoin after all.

For the real estate agent, this did not result in a lower commission by any means. BitPay converted the funds to fiat currency, and the deal was still settled for US$4m. Thankfully for the buyer, he spent roughly 1,330 Bitcoin less on the purchase than was originally needed. A good outcome for all parties involved, and an excellent example of why Bitcoin can be such a powerful asset. Had the buyer relied on US Dollar for this entire purchase, there would have been no gains whatsoever.

Although buying a property would be far out of reach for most current Bitcoin enthusiasts, early adopters are presented with a golden opportunity to cash out some of their investments. Then again, the vast majority of early adopters continues to hold on to their Bitcoin balance for now. It would not be entirely surprising to see more users convert a part of their holdings to real estate in the future.

Tags: bitcoinBitcoin NewsProfitResl Estate
TweetShare
BitStarz Player Lands $2,459,124 Record Win! Could you be next big winner? Win up to $1,000,000 in One Spin at CryptoSlots