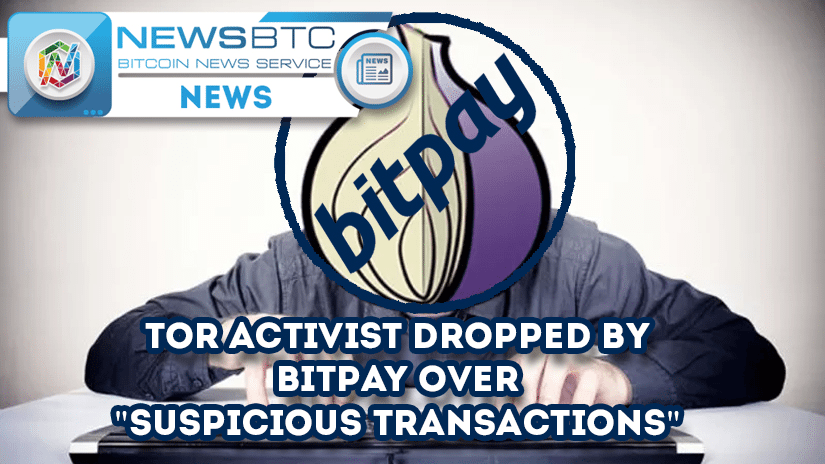 In the world of Bitcoin and cryptocurrency, one would not expect people to get “banned” by a payment processor. Unfortunately, that is exactly what happened to Moritz Bartl, who is an avid supporter of the Tor project A few days ago, he received an email from BitPay stating how he would no longer be able to accept Bitcoin payments through the service. Apparently, the company feels his business is bringing a number of “high-risk transactions” to the table.

This entire story is quite baffling, to say the least. Moritz Bartl is a Tor activist, who also runs the TorServers platform. As part of this platform, he decided to use BitPay for Bitcoin donations. On paper, there is absolutely nothing wrong with this idea, as it allows for the widespread usage of Bitcoin.

An Unusual Decision By BitPay

For some reason, BitPay has decided to drop Bartl from their service. The company claims the donation address received several “suspicious transactions”. As is the case with any payment processor, BitPay monitors all incoming transactions and performs routine checks. During one of these checks, some unclear information came to light, prompting this drastic decision.

As of January 24, Bartl’s BitPay account has been closed without an option to appeal this decision. He will still be able to receive any pending funds based on his predetermined settlement instructions. For the time being, the BitPay payment gateway remains active, but that service will come to an end on January 31. BitPay also advised him there is no way to reinstate transaction capabilities after January 31.

Looking at the TorServers project, it seems strange donations for this service would be flagged as suspicious. It makes a lot of sense to accept bitcoin payments, due to this global availability. Thankfully, it appears TorServers will continue to accept Bitcoin payments to their regular address, for the time being.

This news raises an important question. Why would a Bitcoin payment processor take a decision to cut off individual projects and companies? This tactic shows a lot of similarities to how traditional credit card processors operate. A lot of people expected more from companies such as BitPay, that much is certain.

Tags: bitcoinBitcoin Newsbitpaytor
TweetShare
BitStarz Player Lands $2,459,124 Record Win! Could you be next big winner? Win up to $1,000,000 in One Spin at CryptoSlots