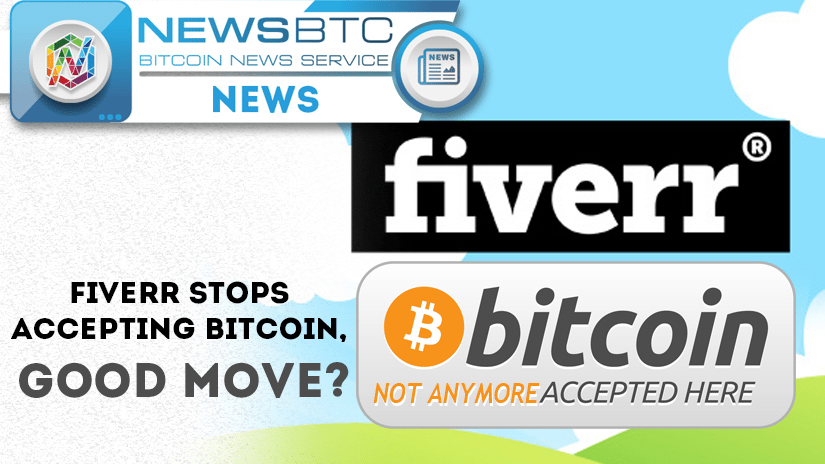 The global freelancer community is one of the largest users of Bitcoin. The digital currency whose qualities includes faster, inexpensive cross-border transactions and support for microtransactions makes it an ideal choice for freelancers as they usually work on both small and big tasks, for clients across the world. Fiverr, a global online freelance marketplace recognized this advantage and included Bitcoin support on its platform. However, things haven’t seemed to work in its favor lately as the platform recently announced its decision to stop accepting Bitcoin.

According to reports, the platform recently sent out an email to account holders announcing the removal of Bitcoin payment option starting January 19, 2017. The message, posted on various cryptocurrency boards and forums reads,

“We noticed that you previously used Bitcoin to purchase services on Fiverr. Effective January 19, 2017, Bitcoin will no longer be accepted as a form of payment on Fiverr. However, you will still be able to make purchases using your debit or credit card, PayPal or Fiverr credit. “

The announcement comes as a disappointment to many entrepreneurs, startups and small businesses who have been utilizing the Bitcoin payment option on Fiverr’s services on a regular basis. However, Fiverr team begs to differ. In response to queries regarding withdrawal of Bitcoin support, the platform has cited lack of interest among its customers in the digital currency as a reason.

While the reason offered by Fiverr seem questionable, it may have something to do with its settlement policy. The platform, which started accepting Bitcoin in partnership with Coinbase was offering settlements to freelancers in fiat instead of Bitcoin. It allowed only one set of customers to take advantage of the digital currency while the freelancers were left to rely on conventional payment options.

At the same time, the announcement may lead to a significant drop in Bitcoin paying customers. Many employers will start looking for alternatives like XBTFreelancer to seek freelancers for various tasks. Even in the forum discussions, few have already mentioned their decision to switch from Fiverr to other platforms that allow them to pay with Bitcoin.

Fiverr could have improved its services by making it easier for both employers and freelancers to conduct transactions using Bitcoin and other cryptocurrencies. Instead, it decided to get rid of a crucial feature, which could have offered great returns in the near future.

Tags: bitcoinBitcoin NewsfiverrFreelancerNewsxbtfreelancer
TweetShare
BitStarz Player Lands $2,459,124 Record Win! Could you be next big winner? Win up to $1,000,000 in One Spin at CryptoSlots