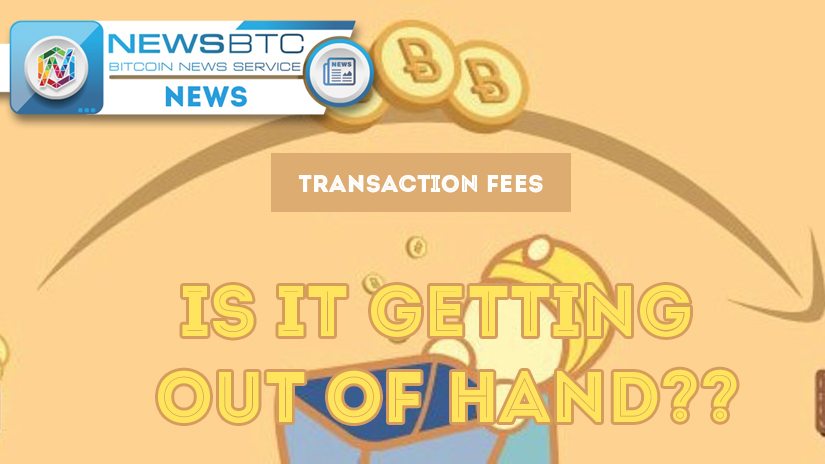 The average bitcoin transaction fee has risen steadily over the past few years. Albeit that is not entirely surprising, things are getting out of hand as of late. Looking at the chart on blockchain.info, the total transaction fees paid to miners have surpassed US$150,000 in 2017. That is a ridiculous amount, yet it will keep increasing steadily until the block size issue is resolved.

When Satoshi Nakamoto created bitcoin, it was evident transaction fees would overtake block rewards at some point. To be more precise, his code indicated this would not occur for the next 100-or-so years. Unfortunately, things are working out very differently. Transaction fees have grown exponentially as of late, which does not bode well for those looking to use BTC as a currency.

Over the past two years, the total transaction fees on the network have increased fiftyfold. Such explosive growth is rather strange, yet it also highlights an underlying problem. With the block size remaining one MB for now, paying a higher transaction fee slowly becomes the new normal. For miners, this is somewhat good news, as they will earn slightly more money in the process. For consumers, this makes using bitcoin more expensive than it needs to be.

Albeit an increase in transaction fees shouldn’t surprise anyone, these numbers are rather worrisome. Keeping all transaction fees combined below the US$10,000 level seemed very likely for some time. In fact, things only got out of hand from 2016 onwards. As the bitcoin network grows, more transactions take place, all of which need to be included in network blocks.

Given the “limited space’ every block has, network congestion occurs more often than before. Bypassing this artificial blockage requires paying higher fees. In the end, this scenario creates an endless circle that will force users to pay more fees until a solution is found.

Solving the problem is not an easy task, though. It is evident the current situation can’t be maintained for much longer. Removing the block size altogether is one option, according to some Reddit users. Scaling bitcoin remains a critical problem that requires action sooner rather than later. These political games have gone on long enough, that much is certain.

Tags: bitcoinBitcoin NewsNewsscalingtransaction fees
TweetShare
BitStarz Player Lands $2,459,124 Record Win! Could you be next big winner? Win up to $1,000,000 in One Spin at CryptoSlots