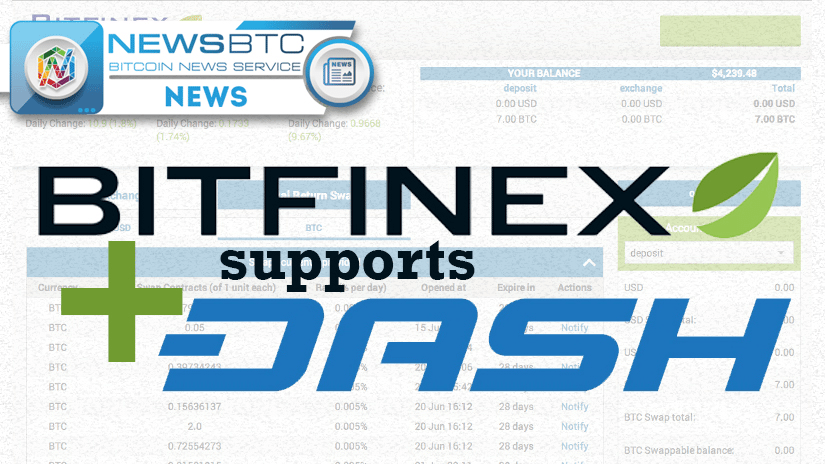 Dash, the altcoin has positioned itself as one of the potentially powerful cryptocurrencies in the market. The third largest digital currency, in terms of market capitalization, Dash has displaced the likes of Ripple, Litecoin, and Monero to gain that position. It is going to further strengthen its position in the coming days, following the recent integration with Bitfinex.

In a recent press statement, Dash announced its inclusion into one of the leading cryptocurrency platforms. The altcoin started trading on Bitfinex platform at 1 PM EST, Friday, March 3, 2017. The newly included altcoin can now be traded against Bitcoin(DASH/BTC) and US Dollar (DASH/USD).

According to the release, Dash has experienced a 22-fold increase in trading volumes since the beginning on 2017. The cryptocurrency which was trading at around $11 in January is now valued at $47.05. Its growth rate during the year is currently pegged at 295%, compared to Bitcoin’s 22% and Ethereum’s 57%.

Speaking about the inclusion of Dash into Bitfinex, the VP of Business Development at Dash Daniel Diaz said,

““The partnership is recognition of the way the market has been responding to Dash’s vision and roadmap. I am a firm believer that the free market will always recognize true value when growth and performance is sustained over long periods of time. Partnering with Bitfinex is a very important step for Dash as we look to provide good, regulated on and off ramps to the network that really make user applications easier. Dash is in a transition towards the regulated fiat exchanges that will make it a lot easier for users and investors to move in and out of the Dash economy, which will reduce friction and allow Dash to trade directly for fiat currencies in the more popular exchanges in the blockchain industry.”

The increased demand for Dash in the recent days is mainly due to the latest developments in the platform. The recent Sentinel upgrade released by the platform has laid the foundation for the upcoming payments system, codenamed Evolution. With increasing Bitcoin transaction backlogs and the growing need for a scalable cryptocurrency payments systems, Dash’s adoption is catching up.

Dash has also received support from some of the leading players in the market, like KeepKey, BlockPay, and BitSane exchange platforms. Treading down the same path, it can potentially replace other currencies to make it to the top.

Tags: bitfinexDashexchangeNews
TweetShare112
BitStarz Player Lands $2,459,124 Record Win! Could you be next big winner? Win up to $1,000,000 in One Spin at CryptoSlots