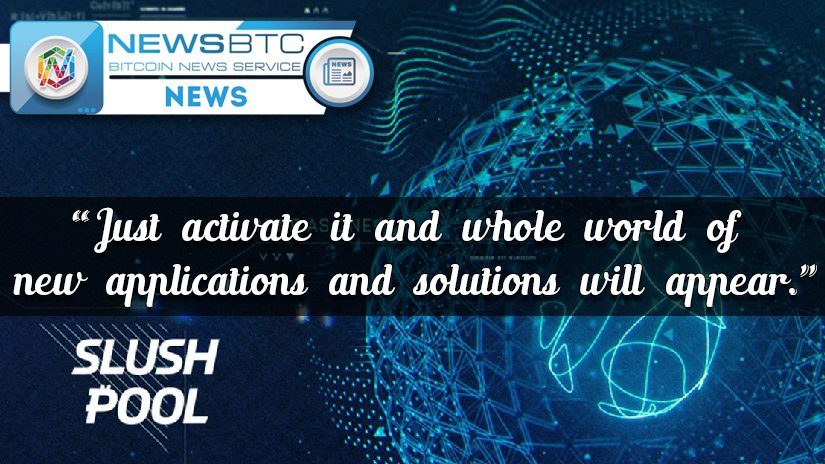 It is evident the back-and-forth debate between BU and SegWit is not over by any means. Even though Segregated Witness continues to struggle regarding achieving majority support, some people feel this debate has gone on long enough. Slush pool one of the oldest bitcoin mining pools, feels SegWit need to be activated right now. In the end, a new world of applications and solutions will appear. An intriguing train of thought that will cause a lot of debate.

It is interesting to see Slush pool take this stance right now. The pool is one of the only ones signaling both SegWit and BU support right now. However, it appears the owner remains pro-Bitcoin Core, as he has been for several years now. In a recent tweet, he claims how SegWit should “just be activated’. A strong sentiment, although perhaps not the most popular one. After all, Segregated Witness has less than 30% network support, which is not enough to activate under normal circumstances.

Bitcoin as Gold is Bitcoin without Segwit. Just activate it and whole world of new applications and solutions will appear.

If SegWit were to activate right now, coders would have no choice but to build new applications and platforms. This would benefit the bitcoin ecosystem as a whole. The current standoff with Bitcoin unlimited only causes more problems and unnecessary delays. It is understandable people may feel SegWit is not the best solution, but actively opposing progress is not acceptable.

A large amount of BU supporters opposes SegWit due to Blockstream being involved. Having a company determine the future of bitcoin is not decentralization. However, Blockstream also funds the Core development, which has been invaluable over the past few years. It is unclear what everyone’s intentions are, although BU supporters seem more than happy to split bitcoin in two. Once again, it’s not an acceptable outcome by any means.  Progress is needed to keep bitcoin moving forward, whereas stagnation will only cause irreparable damage.

Another intriguing aspect about this statement is how it will likely upset a lot of miners. With the block reward halving, miners enjoy these higher transaction fees. However, if the scaling debate is resolved, higher tax fees will be out of the question. A lot of people will not enjoy this development, as miners will earn less. Then again, a scaling bitcoin ecosystem will allow the price per BTC to rise, solving that problem as well. Bitcoin miners should never oppose network innovation in the first place, yet they are doing exactly that.

Rest assured Bitcoin Unlimited supporters will continue to oppose SegWit moving forward. Even though SegWit offers some advantages to BU miners as well, it is doubtful they will see things that way. SegWit does not force users to rely on the Lightning Network at a later stage either. Instead, it will lay the foundation for that protocol, which remains an optional feature.

Tags: Bitcoin NewsegWitscalingSlushS
TweetShare
BitStarz Player Lands $2,459,124 Record Win! Could you be next big winner? Win up to $1,000,000 in One Spin at CryptoSlots