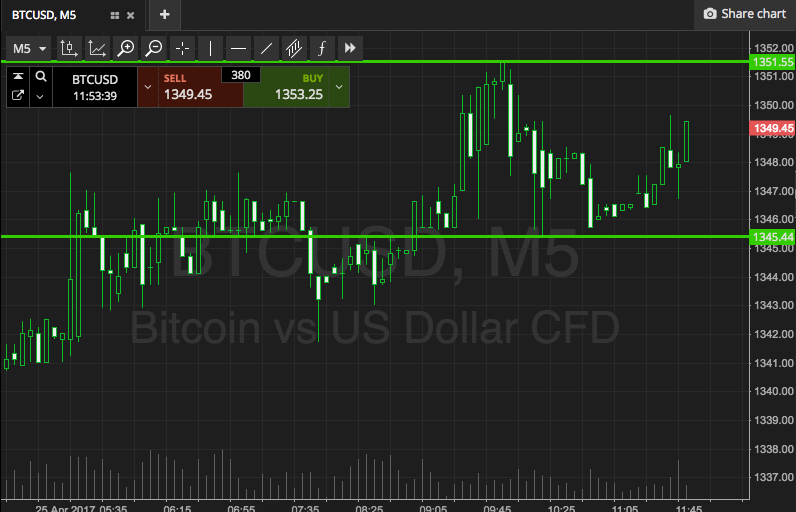 And we’re off on another day in our bitcoin price trading adventures, and things are really starting to heat up. We started out in and around the 1150 level just a couple of weeks ago, and things we’re really on the fence as far as a bias was concerned. Price could have dropped below 1100 and signaled a longer term bearish bias. Alternatively, it could have run and broke the 1200 mark, and got us on the side of a bullish bias longer term. As it turns out, the latter of these two scenarios played out, and we’re not trading in and around the 1350 mark – fresh highs, and with some of the strongest volume (and corresponding support) we’ve seen in a while.

So what are we looking at going forward as supportive of our long term bias?

Well, we want to see 1300 hold, for sure. That said, we’re ideally looking for a break above 1400 as strongly indicative of the suggestion we’re going to see long term strength, and that current levels will hold.

Looking short term, here’s what we’re going for. Take a quick look at the chart below to get an idea what’s on, and where we are looking to get in and out of the markets according to the rules of our strategy. As the chart shows, the range we are looking at right now is defined by support to the downside at 1345, and resistance to the upside at 1351. We’re going to look out for a close above resistance to signal an immediate upside entry towards an initial upside target of 1365. A stop at 1348 looks good. If we see a close below support, we’ll be getting in to a short trade towards 1335. A stop at 1348 will take us out early if things go against us.