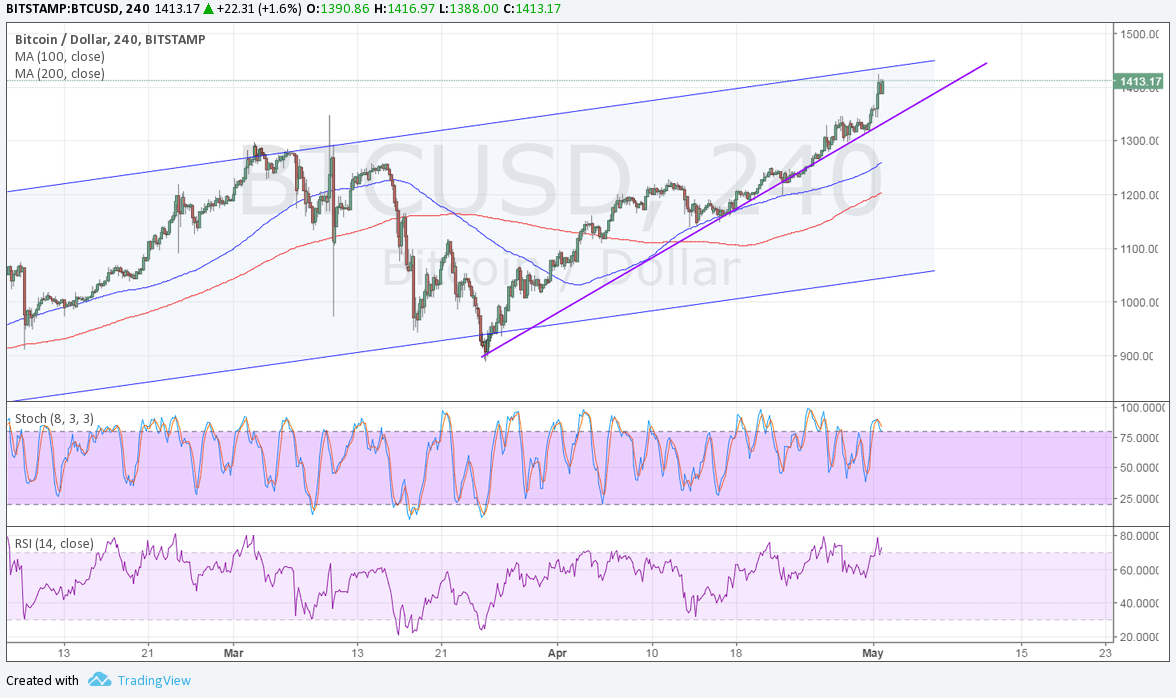 Bitcoin price is currently enjoying strong support, but a pullback could be needed before more buyers join in on the action.

The 100 SMA is above the longer-term 200 SMA, still indicating that the path of least resistance is to the upside. In other words, the uptrend is more likely to continue than to reverse. However, it’s also worth noting that the gap between the moving averages is narrowing to suggest a possible slowdown in bullish momentum.

Stochastic is also turning lower from the overbought region, hinting that selling pressure could kick in soon. In that case, a pullback to the trend line support around $1350 could be seen before the rally resumes. RSI is also indicating overbought conditions and appears to be turning south so bitcoin price might follow suit. US economic data turned out mostly weaker than expected in the latest New York session, hinting at a possible slowdown in the consumer sector on weak personal income and spending figures. Also, the ISM manufacturing PMI posted a steeper than expected decline, also suggesting a potential downside NFP surprise later on this week.

If so, this would pile on the latest set of downbeat data from the US, casting more doubt on the Fed’s ability to hike interest rates two more times this year. Note that the earlier NFP reading already came in way below expectations at 98K in March and analysts are expecting a bit of a pickup in April to 194K. As for bitcoin, the lack of negative news has allowed the cryptocurrency to keep advancing on rising demand from Japan.

Tags: bitcoin pricebitcoin signalsbitcoin technical analysisbitcoin tradingbtcusd signals
TweetShare
BitStarz Player Lands $2,459,124 Record Win! Could you be next big winner? Win up to $1,000,000 in One Spin at CryptoSlots