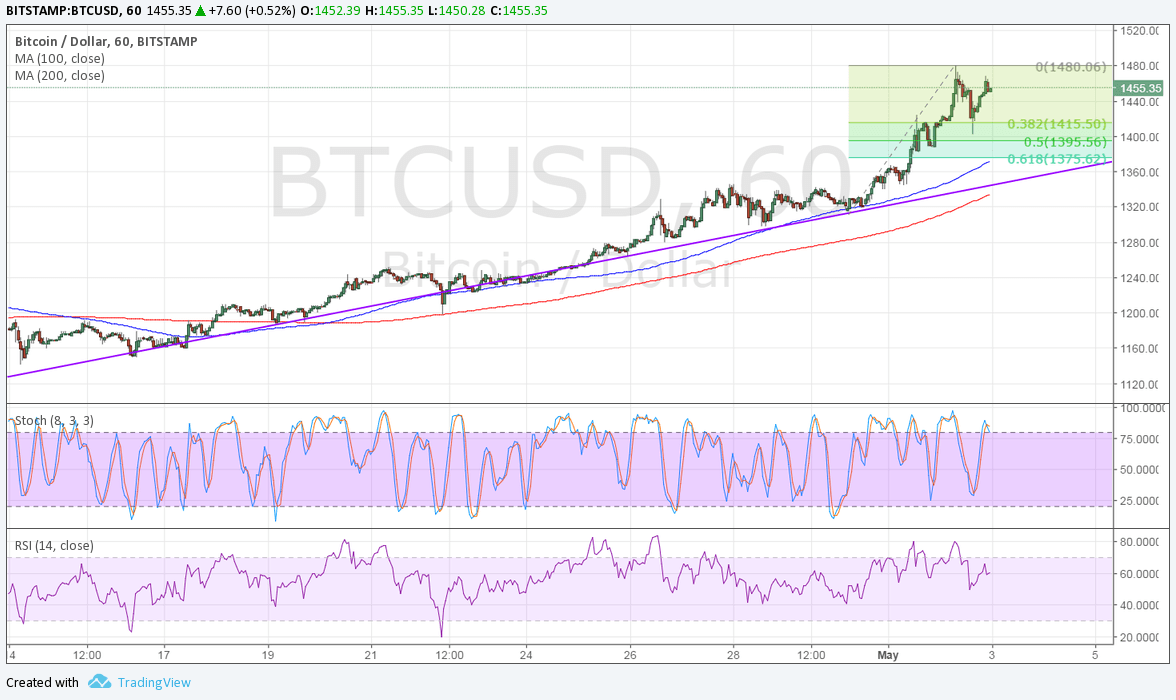 Bitcoin price might see a pickup in volatility with top-tier happenings in the US, possibly leading to a larger correction or another break higher.

The 100 SMA is above the longer-term 200 SMA on this chart so the path of least resistance is to the upside. The gap has been pretty constant, reflecting continued presence of bearish pressure. Also, the 100 SMA is nearing the 61.8% Fib, adding to its strength as a floor in the event of a quick pullback to $1375.

The 200 SMA is closer to the rising trend line connecting the recent lows on the 1-hour time frame. This could be the line in the sand in this uptrend pullback as a break below the $1300 area could mark the start of a longer-term drop.

Stochastic is already in overbought territory, signaling that profit-taking could happen soon as bullish momentum slows. RSI is also on the move down, indicating that bears are regaining control of bitcoin price action. Still, a large selloff in the dollar could lead to a break past the swing high and onto a test of the $1500 major psychological level depending on today’s market events. In particular, the FOMC statement is seen to be a huge catalyst for dollar moves this week as traders are eager to find out if the US central bank is shifting its monetary policy bias. Earlier on, policymakers have been confident that they can hike interest rates three times this year but recent data and the slow pace of government reforms could dampen tightening expectations.

Apart from that, the ADP non-farm employment change report and the ISM non-manufacturing PMI could provide some clues on how the NFP release might turn out. Recall that the jobs report printed a weak 98K increase last time and another disappointment could lead to dollar weakness, allowing bitcoin price to advance further.