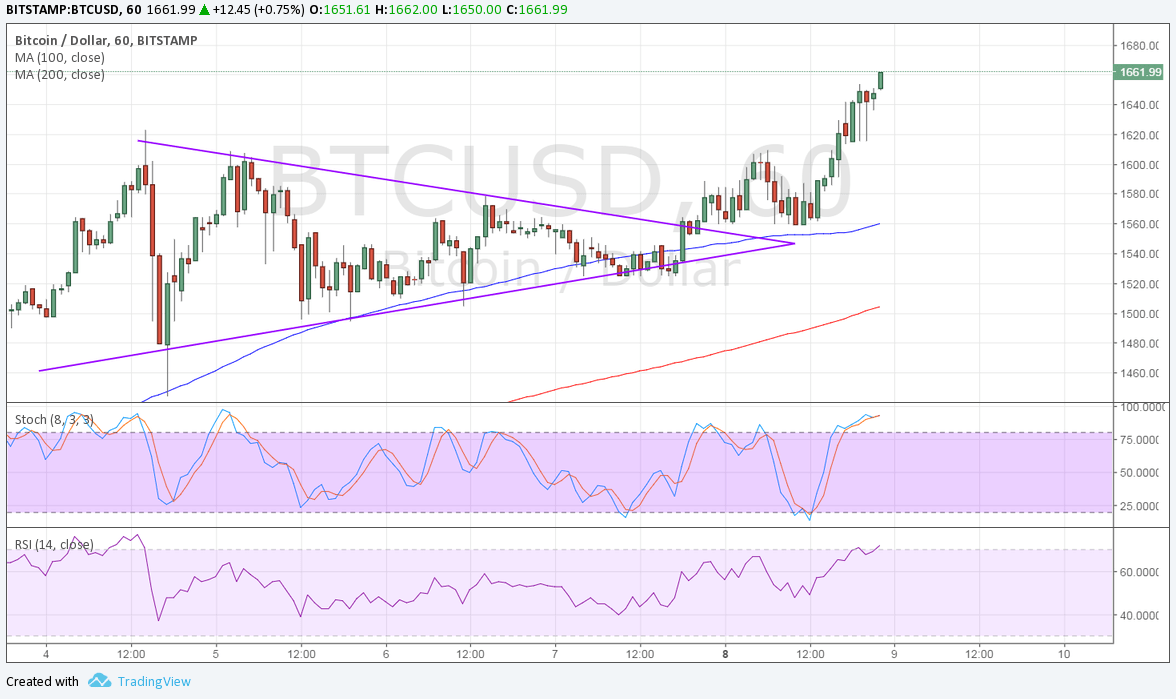 Bitcoin price looks poised for more gains as it set yet another record high and appears to be gunning for $1700.

The 100 SMA is safely above the longer-term 200 SMA on the 1-hour time frame, confirming that the path of least resistance is to the upside. Price also bounced several times off this dynamic support area, which indicates that it holds up pretty well as near-term support during pullbacks.

However, the gap between the moving averages is narrowing to reflect slowing bullish pressure so another correction could be underway. In addition, stochastic is already indicating overbought conditions to show that bulls need a break. Once the oscillator turns lower, sellers could regain control as traders book profits.

RSI is also approaching the overbought zone to reflect rally exhaustion, but this oscillator has yet to turn lower before indicating that bears are gaining the upper hand. Potential pullback areas are around the $1600 major psychological mark or the 100 SMA at $1550. In the absence of top-tier economic data from the US, investors turned their focus to headlines pertaining to reforms by the Trump administration. Recall that the healthcare bill has just recently passed Congress and is now with Senate, and that the next item on the agenda is financial deregulation.

Now this could mean a lot of upside potential for bitcoin price as the newly-confirmed SEC head has been told by Trump to loosen rules in the industry while implementing stricter supervision of the banking sector. This has raised speculations that the regulator could be more lenient in approving the COIN bitcoin ETF, which might drastically boost interest and volumes in the cryptocurrency industry.