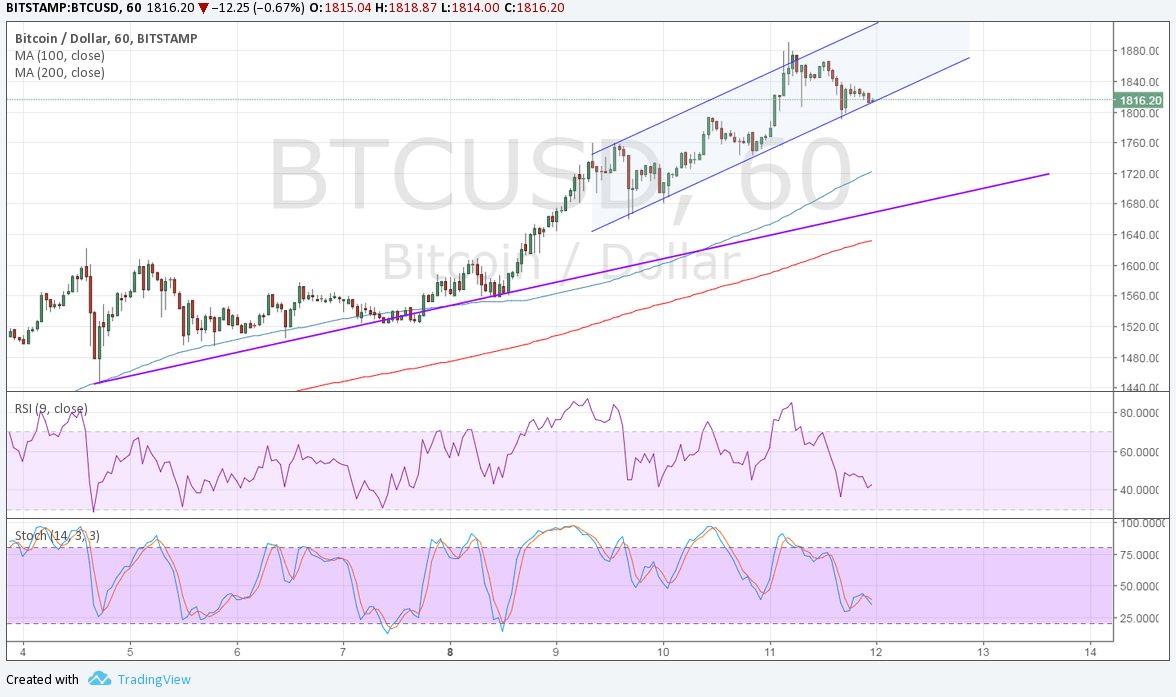 Bitcoin price might be in for a much-needed correction as signs of rally exhaustion are starting to materialize.

The 100 SMA is above the longer-term 200 SMA on the 1-hour chart so the path of least resistance is to the upside. Also, the gap between the moving averages is getting wider to reflect strengthening bullish momentum.

Stochastic is on the move down, though, so bitcoin price might follow suit. In that case, the channel support around $1815 could break and set off a larger pullback to the trend line at $1700 or until the 100 SMA dynamic support at $1720. The 200 SMA dynamic inflection point is close to the trend line at $1650, which might serve as the line in the sand for an uptrend correction.

RSI is also heading south to show that sellers are in control of price action for now. However, once both oscillators hit the oversold areas and turn higher, buying pressure could return and push for another move to the highs at $1880 or higher. Bitcoin price has given up some ground as ex-FBI chief Comey recently remarked that virtual currencies are making it difficult to investigate crimes. This reminded market watchers of the use of bitcoin back in the day as a means to facilitate illegal transactions involving drugs or terrorism.

Some of our criminal investigators face the challenge of identifying online pedophiles who hide their crimes and identities behind layers of anonymizing technologies, or drug traffickers who use virtual currencies to obscure their transactions,” he said.

This marks a bit of a blow to the otherwise strong progress that bitcoin  has made in the past months, starting from the Japanese government’s decision to support its legitimacy as a legal form of payment and the SEC’s announcement that it’s willing to give the COIN bitcoin ETF another chance.