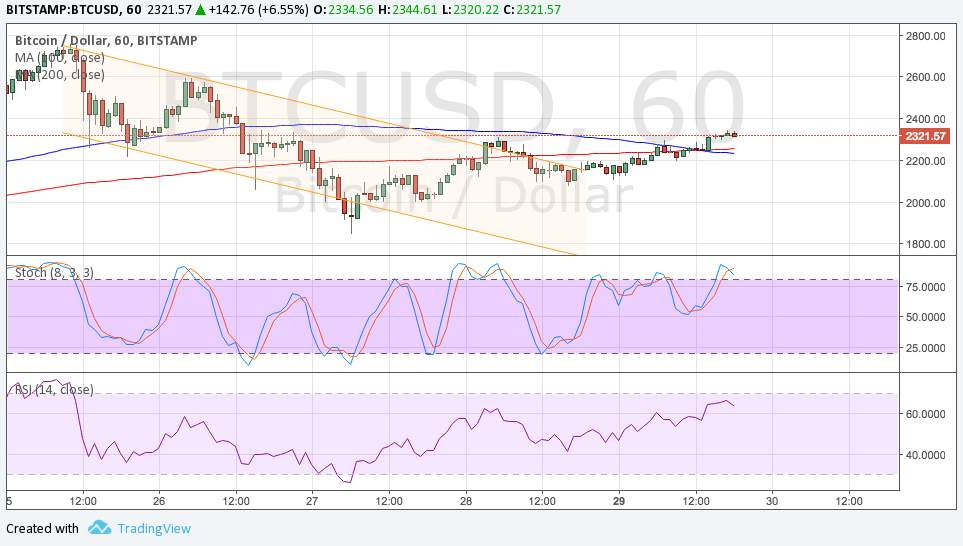 Bitcoin price has surged past its short-term downtrend channel resistance to signal that buyers are gaining the upper hand again.

The upside breakout from the channel has been weak as the momentum was barely sustained on the move up. Also, the 100 SMA has crossed below the longer-term 200 SMA to indicate that the path of least resistance is to the downside. In other words, the selloff is more likely to resume at some point.

Stochastic is also indicating overbought conditions and is crossing down to suggest a return in bearish pressure. If so, bitcoin price could revisit the broken channel resistance for a retest or move back to support at $1800 or lower.

RSI is still on the move up to suggest that buyers have the upper hand but this oscillator is also nearing the overbought region to reflect rally exhaustion. After all, bitcoin price is currently hovering at an area of interest or former support at $2300-2400. Although fundamentals are positive for bitcoin price at the moment, traders appear to be holding out for another batch of stronger catalysts similar to what we’ve seen in the previous weeks before taking the cryptocurrency to new heights.

For now, geopolitical risks have subsided as markets are calming down after the Manchester Arena attack and area also seeing hints of political stability in the UK with the ComRes poll. In the US, the attention has shifted away from the probe into Trump’s intelligence information leak to Russia and onto the positive revision in Q1 GDP, which has been bullish for US assets, including the dollar.

Moving forward, industry news could still lead to another wave higher for bitcoin price as developers and miners show more progress in eventually executing their plans for the scalability agreement.