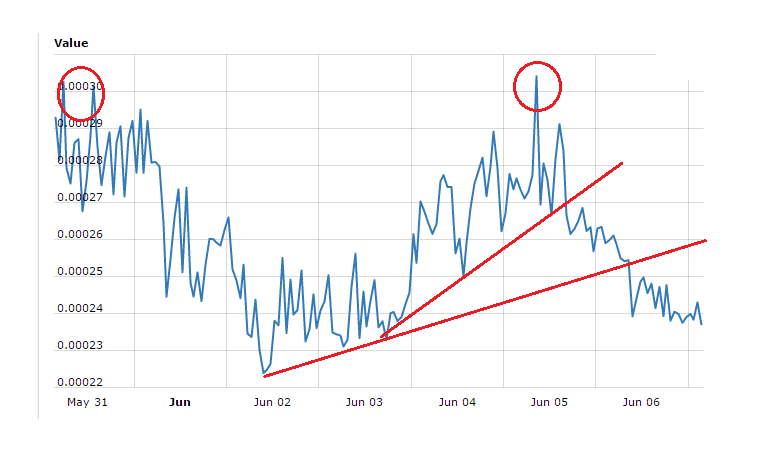 Creditbit price after a minor recovery against the US Dollar and Bitcoin found resistance. CRBIT/BTC moved down once again and back testing 0.00023BTC.

There was yet another failed upside break in Creditbit price above 0.00030BTC against the Bitcoin. In the last analysis, we saw how there was recovery started from the 0.00023BTC support. The price broke the 61.8% Fib retracement level of the last decline from the 0.00032BTC to 0.00023BTC low. However, the upside move failed near a major resistance at 0.00030BTC. The price was not able to clear 0.00030BTC and moved down.

There is a possibility of a double top pattern formation at 0.00030BTC, considering the fact that there were two failed attempts. During the downside move, there was a break below the 50% Fib retracement level of the last wave from the 0.000225BTC low to 0.000305BTC. Moreover, there were two important bullish trend lines break at 0.00027BTC and 0.00025BTC on the 7-day chart of CRBIT/BTC. These are significant bearish signs, but the 0.00023BTC support holds the key in the short term. As long as the price is above the 0.00023-22BTC levels, it remains supported. Looking at Creditbit price against the US Dollar, there is steady price action above $0.60. However, there is no close above $0.70 yet. Once there is a break and close above $0.70-0.75, there can be more gains in the near term.

Hourly MACD – The MACD for the CRBIT/BTC pair is back in the bearish zone.

Hourly RSI – The RSI for the CRBIT/BTC pair is currently in the oversold region.