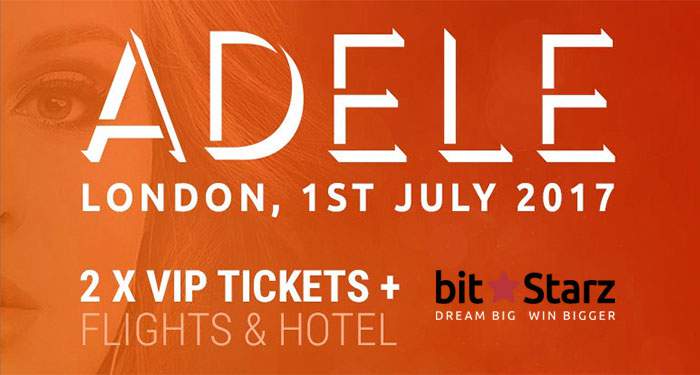 Bitcoin gambling is not always about scoring a bonus or winning a jackpot; it is also about entertainment and an experience of a lifetime. BitStarz, a leading cryptocurrency online casino platform has decided to offer an opportunity for its patrons to be part of something monumental — attendance at the Adele concert scheduled for July 1, 2017.

BitStarz has got two exclusive VIP tickets to the Adele concert along with flight tickets and accommodation arrangements for one lucky person. Participating in the contest is very easy, all one has to do is keep playing on the platform. Starting June 1, 2017, players receive one raffle ticket for every EUR 20 deposit made on BitStarz platform. These lottery tickets mark the players’ participation in the contest.

Players can collect as many raffle tickets as possible until June 22, 2017, increasing their chances of winning the grand prize. The winning raffle ticket will be decided based on a lucky draw that will be held at 00:00 CET on June 22, 2017. As soon as the winner is decided, he/she will receive an email with further instructions. BitStarz will be publicly announcing the winner the same morning.

The grand prize for Adele contest includes 2x premium VIP tickets for Adele concert at Wembley, London on July 1, 2017, Accommodation in a 5-Star hotel in London for three nights and 2x airplane tickets worth totaling EUR 2500 or currency equivalent. The contest comes with its own set of terms and conditions which are explained clearly on the website.

Adele’s performance in London is one of the most sought-after events in the country. The concert tickets have become valuable commodities at the moment as they were sold-out within 10 minutes of release. However, one lucky BitStarz patron won’t have to worry about it as the gambling platform will be taking care of not just the tickets but also travel and accommodation.

Both existing and new players on BitStarz can avail this opportunity. Those who are new to the platform can start with creating an account and depositing funds into their respective accounts.

Tags: bitcoinBitStarz
TweetShare
BitStarz Player Lands $2,459,124 Record Win! Could you be next big winner? Win up to $1,000,000 in One Spin at CryptoSlots