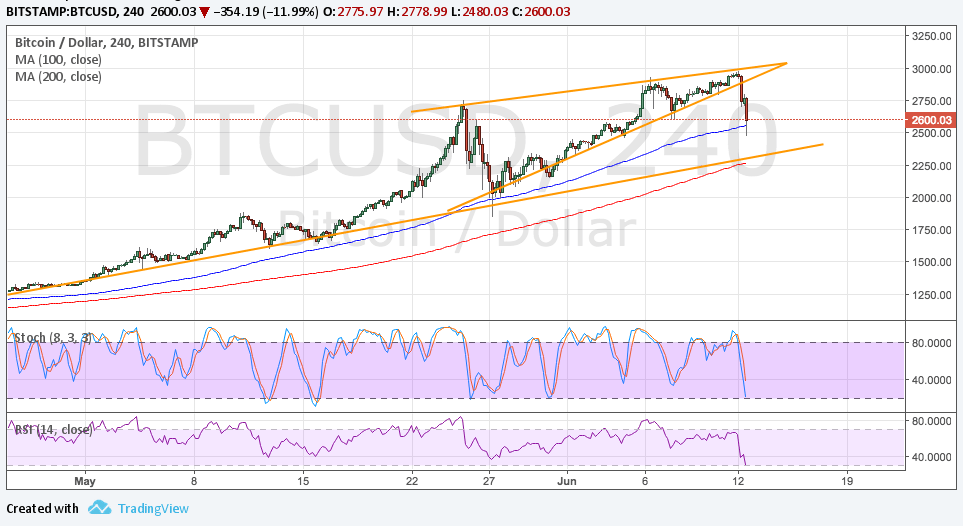 Bitcoin price made a breakdown from the rising wedge pattern to suggest that sellers are regaining control.

The 100 SMA is above the longer-term 200 SMA on this time frame so the path of least resistance is still to the upside. In addition, the 100 SMA appears to have held as dynamic support for the time being as bitcoin price bounced back up from the $2500 area.

The 200 SMA lines up with the ascending trend line connecting the lows since the start of May. This could be the last line of defense by buyers, as a break below this area could mean more longer-term losses for bitcoin price.

Stochastic is pointing down to reflect strengthening selling pressure while RSI is also moving south so bitcoin price might follow suit. Both oscillators are closing in on the oversold regions so sellers might need to take a break soon and let buyers take over. A bounce off the rising trend line could lead to a test of the all-time highs close to $3000. A small double top formation can also be seen on the 4-hour chart and bitcoin price has already broke below the neckline around $2800. The bounce constitutes a short-term pullback to the broken neckline visible on shorter-term time frames.

A larger correction could last until the broken wedge support at $2800 before more bearish momentum kicks in. Note that the chart pattern spans $2000 to $3000 so the resulting move could be of the same height.

The drop in the US tech sector is being blamed for the slide in bitcoin price but the latter actually started earlier on in the trading day. As it turns out, several exchanges have been reporting problems due to unprecedented traffic and trade activity.